Stigma, lack of govt support leave a dearth of opportunities for disabled people in Thailand 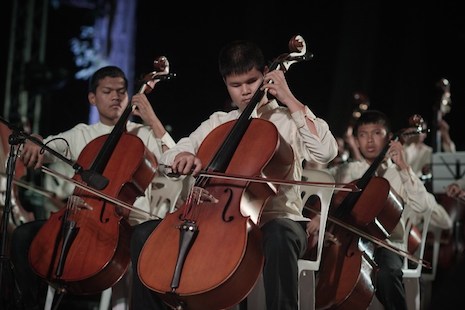 Share this article :
Deftly feeling their way along the bumps of the braille score, the young players of Thailand's first blind orchestra memorize scales, defying both their impairment and ingrained negative attitudes towards disability. It is rehearsal time just hours ahead of a concert at an open-air auditorium in a national park, and around 30 fledgling classical musicians enthusiastically strum, pluck and bow instruments they have held but never seen. "At first it was really hard for me... I wanted to stop," said Joe a 14-year-old budding cellist who picked up the stringed instrument nine-months ago. "But when I realized that others could do it, I gave it another try," he told AFP, smiling broadly.  Official figures show that Thailand is home to 1.8 million disabled people, of whom around 180,000 are blind, in a population of more than 64 million. Yet campaigners say state provision for disabled people is poor, compounding a widely held Buddhist belief in karma that, in the minds of many, links physical impairments with the supposed 'misdeeds' of a past life. The Thai Blind Orchestra, made up of players aged between eight and 15 years old, offers a rare positive platform for disabled Thais. The orchestra, who use donated instruments, were brought together by a professional classical musician whose day job is looking after elephants in the Khao Yai national park in northeastern Nakhon Ratchasima province. 'The kids are happy' The seeds of the idea were planted when the blind students met their soon-to-be maestro, Alongkot Chukaew, at his conservation classes in the park. Teaching with the help of audible aids, including his guitar, the 43-year-old Alongkot noticed music caught the attention of the children. He asked his music teachers to play different instruments and encouraged the youngsters to follow the sound they liked best. As their affinity with their chosen instrument mushroomed, Alongkot introduced a braille system for the students to learn to read classical music. Shown one-on-one how to position their fingers on their instruments, the children then memorize both the notes and the correct placement to make the right sounds. "It was hard because they cannot see the demonstration of where to put their fingers or hold the bows," said Alongkot. "But it was fun." "Some people might not like their performance, but the kids are happy and have fun with it," he said, adding they are not looking to compete.  Attitudes towards disability across Southeast Asia are often shaped by a sense of karmic destiny.  The same philosophy that encourages people to do good deeds so they may be rewarded on reincarnation also leads people to believe that the disabled suffer their impediments because of their actions in a past life. It is something that holds back progressive policies and leaves many of the region's disabled in poverty or hidden at home by ashamed families. "Disabled people are the poorest of the poor," explains Suporntum Mongkolsawadi, a Thai double-amputee from childhood who now campaigns for improved rights. "The belief in karma makes disabled people think they should just surrender and accept their fate," added the 48-year-old, who heads the Redemptorist Foundation for People with Disabilities.  'My gift is music' Activists say other countries in the region such as Malaysia, Singapore and Philippines tend to have a better track record of rolling out disability aids and policies. Suporntum blames Thailand's lag on years of political instability and short-lived governments for hampering policy changes to transport, education and health. While the law codifies equality, in practice life remains at best complex for many disabled Thais. Most public transport lacks wheelchair access, few state offices have ramps and there are no braille signs and few voice signals. Jobs are also sparse while social opprobrium runs high. But Suporntum sees some reasons for hope, saying the ruling Thai junta is well placed to drive through change, after it vowed to make society more inclusive and include rights for all in its reform agenda. In January, a Bangkok court ordered that lifts be installed at 19 more stations of the capital's elevated skytrain service within a year — up from four currently — an issue Suporntum has campaigned on for eight years. But for real change to take place Thailand must first shed its preconceptions on disability, says Rosalina Alexander McKay, an activist from the Rainbow Room Foundation in Bangkok.   "You don't have to change the belief system but you have to change your ways of looking at things," adds Rosalina, who has a seven-year-old daughter with Down's Syndrome. As sighted volunteers prepare to lead the orchestra to their seats — and instruments — on the open-air stage, cellist Joe says he refuses to be held back by received notions of karma.  "I cannot see but I have good ears... that is my gift in music," he says, the outline of trees overhead as the stage lights catch his crisp white shirt. "When we lose one thing, there will always be a substitute." AFP