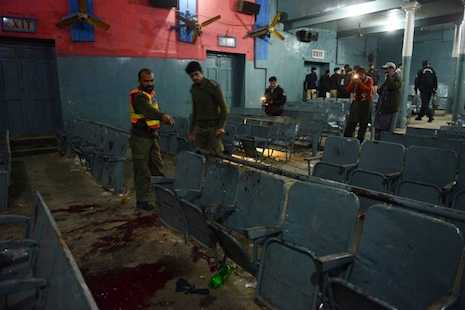 Pakistan's hopes of initiating a peace process with the Taliban suffered a blow after five people were killed in twin blasts at a movie theater in the country’s troubled Khyber Pakhtunkhwa province on Sunday evening, police said.

Another 31 people were injured in the attack, which happened at Qissa Khwani Bazaar in Peshawar, the provincial capital of Khyber Pakhtunkhwa.

Senior police officer Faisal Mukhtar said that about 90-100 people were inside the Picture House Cinema when two Chinese-made hand grenades were detonated. Mukhtar said police had informed theater owners of a threat and suggested they implement security scanners and add security guards

"We have opened a probe to determine why checks were not carried out before letting people inside the cinema hall," he said.

According to police, the assailants hid the grenades inside turbans.

Khyber Pakhtunkhwa Information Minister Shah Farman told reporters that the blasts could be an attempt by a third group to sabotage the peace process.

The blasts came a day after the banned Tehreek-e-Taliban Pakistan, an umbrella group of various militant outfits, named a committee of five prominent political and religious leaders, including cricketer Imran Khan, to represent the group in peace talks with the government.

Khan, whose Tehreek-e-Insaf party rules the restive province, said in a statement that the Taliban should select its own members as representatives. However, he said his party will discuss how it can be of further assistance to further the dialogue.