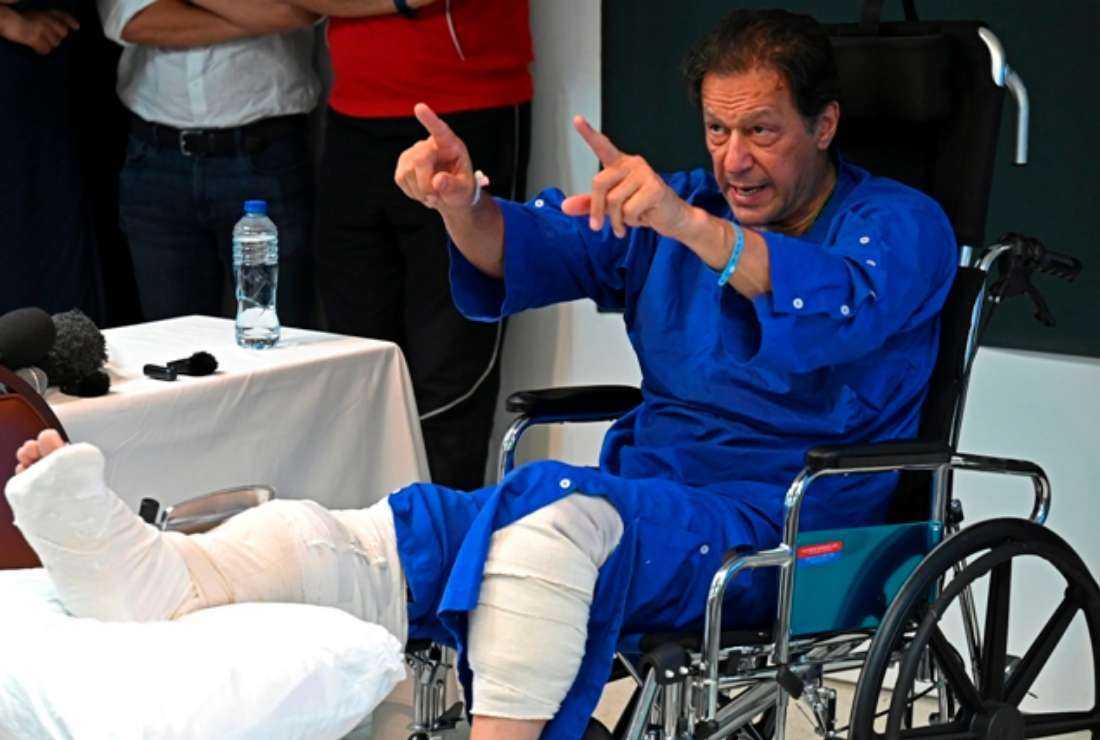 Pakistan's former prime minister Imran Khan addresses media representatives, a day after an assassination attempt on him, at a hospital in Lahore on Nov 4. (Photo: AFP)

The never-ending nightmare of the blasphemy law in Pakistan has a new victim — former Prime Minister Imran Khan.

The chairman of the Pakistan Tehreek-e-Insaf (PTI) party was shot in the right leg on Nov. 3 in the eastern city of Wazirabad in Punjab province, where he was leading a protest march against the government.

Khan is the fourth high-profile figure to have been attacked in Pakistan by vigilantes who swear by the blasphemy law and hold the view that everyone who disgraces Islam’s holy figures must die.

Government officials termed the attack as the work of a lone gunman and “a very clear case of religious extremism.”

"He pretends to be giving a message like the Prophet Muhammad"

Naveed Mohammad Basheer, the arrested assailant, has reportedly confessed to the crime and accused Khan of committing “blasphemy” and cited this as a reason for the attempt to kill him.

“He was making noise during Azan [call to prayer] time. He claims to be the prophet of this century. He pretends to be giving a message like the Prophet Muhammad. My conscience couldn’t accept this,” Basheer says in a confessional video doing the rounds on social media.

Khan has been accused in the past of blasphemy and a case was registered against him in May when PM Shehbaz Sharif and his delegation were heckled by PTI supporters during a visit to Saudi Arabia.

Critics accuse Khan of cultivating a cult following and manipulating his followers, especially the youth, who defend printing “peace be upon him” on Imran Khan stickers for display on vehicles. The Islamic honorific, commonly used by Sunni Muslims, follows specifically after uttering the name of the Prophet Muhammad.

The 70-year-old former international cricketer-turned-politician, who is an Oxford graduate, had also criticized the attack on writer Salman Rushdie. Muslims' anger at Rushdie's book Satanic Verses was understandable “but you can’t justify what happened,” he reportedly said.

However, Khan is not the only politician bearing the brunt of blasphemy. Pakistan has witnessed some high-profile cases of blasphemy killings, including the assassination of Punjab governor Salman Taseer in 2011 for calling the blasphemy law a "black law."

"A national assembly member who tabled an amendment to make the law less discriminatory against minorities, had to go into hiding"

Khan was the only mainstream leader to have condemned the murder, and the hero's welcome Taseer’s assassin received in Islamabad.

The incumbent Minority Minister Clement Shahbaz Bhatti was killed in 2011 for advocating reform of the country's blasphemy law.

Sherry Rehman, a national assembly member, who tabled a bill to amend the blasphemy law making it less discriminatory against minorities, had to go into hiding.

In 2018, former Interior Minister Ahsan Iqbal was shot in the arm after meeting a group of Christians in his constituency in Narowal, Punjab province.

His attacker, a leader of the youth wing of the ultra-conservative Tehreek-e-Labbaik (TLP), told the police that he shot the minister for blaspheming against Islam.

The attacker claimed a Muslim saint in a dream had ordered him to shoot Iqbal.

TLP, which focuses on exposing and fighting blasphemy, was born following the judicial execution of Taseer’s assassin.

Blasphemy has been a sensitive issue in Pakistan where at least 1,949 people were accused under the law between 1987 and 2021, according to the Lahore-based Center for Social Justice (CSJ).

The accompanying fanaticism made global headlines when five people, including a Sri Lankan national who worked as general manager of an industrial engineering factory in Sialkot, were killed after being accused of blasphemy last year.

While Section 295 linked to blasphemy in Pakistan’s penal code is a legacy of British rule and more than a century old, it was made punishable by death by adding Section ‘C’ in 1992 in the wake of the fatwa against Rushdie and paranoia that people will disrespect holy figures of Islam

Father Khalid Rashid Asi, diocesan director of the Catholic bishops' National Commission for Justice and Peace, condemned the attack on Khan and said “this is dangerous for democracy.”

“The poor stand no chance when such high-profile people are not safe. It’s a hopeless situation. Religious extremism increases in such crises,” he said.

Archbishop Joseph Arshad of Islamabad-Rawalpindi diocese who is president of the Catholic Bishops' Conference of Pakistan called for a political solution to the recurring problem.

“All political leadership should come together and find a solution for the common good of the people and the progress of Pakistan. We call for brotherhood and peace,” he said.