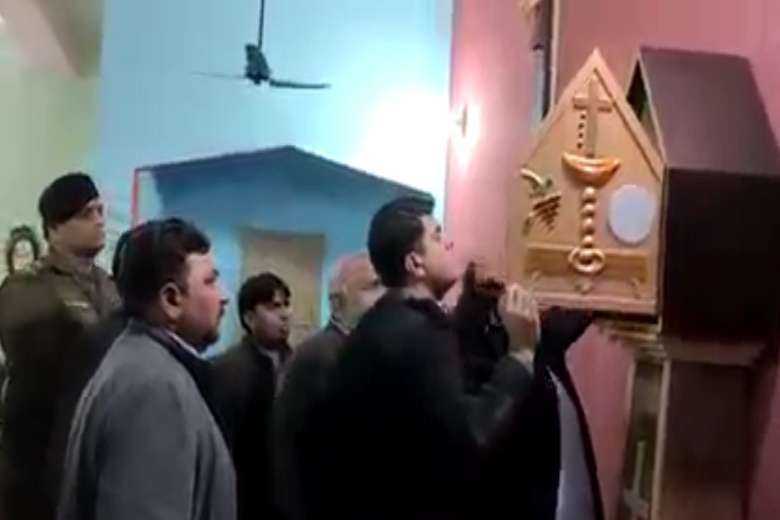 Pakistani police have charged four people with blasphemy for ransacking a Catholic church in a village in Punjab province.

Two policemen have been deployed for the night shift at St. Camillus Church in village 49/2L of Okara district where armed men raided the building, tied up the Christian watchman and threw pictures of the Holy Family, the Eucharist, Bibles and the Ark of the Covenant on the floor on Jan. 23 night.

The Muslim-majority village is home to 120 Catholic families.

A case has been filed under several charges including section 295 of the Penal Code that criminalizes the destruction or defilement of any place of worship or emblem of faith. Those convicted are subject to imprisonment for a maximum of two years.

In a first information report registered on Jan. 24, parishioner Younas Masih said the culprits escaped after desecrating the articles. “The culprits have hurt our religious sentiments by violating the sanctity of the church. They have tried to offend and ruin the peace in our region,” he said.

The latest attack is very strange. Sadly, the wave of religious intolerance comes and goes in our country

“The newly constructed building is on the main road and several laborers complained of the noisy bell. The station house officer has suggested filing an urgent report against anyone protesting against the bell. The raiders covered their faces with shawls and also took the imported ciborium and chalice,” he told UCA News.

According to Father Bonnie Mendes, former executive secretary of the Catholic bishops' National Commission for Justice and Peace, local Catholics had done nothing antagonizing.

“The latest attack is very strange. Sadly, the wave of religious intolerance comes and goes in our country,” he told UCA News.

In May 2021, a mob of more than 200 attacked Christian families in a neighboring village of Okara district.

In August 2021, Christian laborers were forced to remove a cross from the Church of the Nazarene after objections from an angry Muslim mob in Tibba Sultanpur, a Muslim-majority town in Punjab province.

According to the Lahore-based Center for Social Justice, 81 percent of reported cases under the blasphemy laws in 2021 took place in Punjab province.