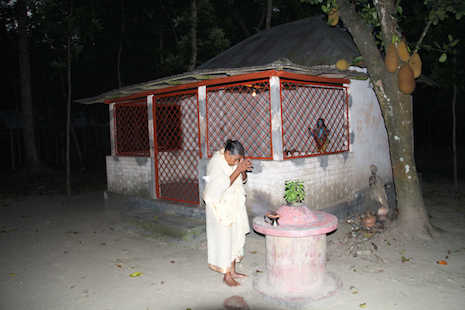 A Hindu woman prays in front of a family temple to Hindu god Jagannath Dev. The family's property was confiscated by the government as Vested Property decades ago (Photo by Stephan Uttom)

In Faridpur district in central Bangladesh, Sanjay Kumar Mitra’s is a well-known face. Mitra, 45, a Hindu and descendant of a once-famous zamindar (aristocratic landlord) family of Pundipur, still lives in the town with his wife and only daughter, although most of his family members and relatives have migrated to India since the mid-1960s.

These days, neighbors often call him zamihara zamindar (landless landlord), referring to the gradual confiscation of the family estate and properties by the state under the Enemy Property Act (EPA) — a discriminatory property law introduced in 1965 by the then Pakistan government.

More than a decade ago, Mitra’s paternal uncle, a doctor, died without any offspring. As the legal heir to his properties, Mitra went to court to place a claim, but the court refused to accept the petition. Instead, the property was recorded as an enemy property by the local land office.

“All our properties were recorded as enemy including the estate. The 1.4-hectare paternal house where I live is also an enemy property,” Mitra told ucanews.com during a recent interview. “For years, I have been fighting a legal battle to get it back and [have] won cases in court, but I have not been able to claim it yet.”

The legacy of Pakistan rule

Mitra is one of more than a million Hindus affected by a fifty-year-old law enacted during wartime, but used to oppress minorities in the intervening decades.

The EPA dates back to the 1965 India-Pakistan war, and was passed in both countries in order to control properties of non-resident citizens in their absence. After the 17-day war, which ended with the Tashkent Pact, the Indian government withdrew the law, but it was kept in East Pakistan (now present-day Bangladesh).

“Basically, EPA was an international law. We have seen application of the law in Europe during World War II. Under this law, the government is supposed to control enemy properties as a ‘custodian’ during the owner’s absence, not as an owner, and hand it over to the owner when the war ends. After the Tashkent Pact, the law should have been virtually dead, but it didn’t happen,” said Rana Dasgupta, a prominent Hindu lawyer and secretary of the Bangladesh Hindu Buddhist Christian Unity Council, a leading minorities rights forum.

“Introduced under Pakistan Defence Rules Ordinance 1965, the EPA was not a discriminatory law at the beginning. However, within 15 days of the proclamation, the Land Ministry published a circular which said, ‘Enemy property owners are those who belong to minority communities,’ and thus an international law was degraded into a discriminatory domestic law,” Dasgupta added.

The law was renamed the Vested Property Act after Bangladesh independence in 1971, but its nature and application remained the same.

Hindus protested for years, eventually pushing for a successful parliamentary repeal on March 23, 1974 by the ruling Awami League government of Sheikh Mujibur Rahman, the founding leader of Bangladesh. However, before adopting a policy for disposal of the properties, Sheikh Mujibur Rahman was assassinated with most of his family members and relatives in a military coup on August 15, 1975.

The military dictator Ziaur Rahman was sworn into power in 1977, and founded the center-right Bangladesh Nationalist Party (BNP), which quickly revived the controversial law.

“Ziaur Rahman wanted to give Bangladesh an identity as an Islamic country. So, he erased ‘secularism’, one of the four key principles of Bangladesh’s 1972 constitution and asserted ‘absolute trust and faith in Almighty God’ to make the constitution religion-based. On the other hand, he reintroduced the VP law,” recalled Dasgupta.

“All the steps had two motives: to create a religion-based communal atmosphere in the country, and to evict minorities from their homes and properties, in order to distribute those among the supporters and beneficiaries of the then-government.”

After more than two decades, the Awami League returned to power in 1996 and took steps to repeal the law. In the last parliament session before the 2001 election, the Vested Property Return Act was passed, but the government didn’t have time to implement it before the BNP regained power. Only in 2008, when the Awami League won power again, was the law revised.

Abuse and harassment of minority Hindus, however, has not stopped.

For five decades now, the law has been used as an effective, abusive tool to relieve minority communities of their properties.

Hindus, who still make up about nine percent of country’s 160 million people, have been the primary target of the law.

An estimated 1.2 million Hindu families have been directly affected by the law and the estimated loss of properties under it is worth US$55 billion, according a 2007 national study titled "Deprivation of Hindu Minority in Bangladesh: Living with Vested Property", by three development and rights groups.

“The VP law created a permanent vicious circle that led to a constant, forcible mass exodus of Hindus to India, breakdown of Hindu families, socio-economic and political repression, destruction of communal harmony and the rise of religious fundamentalism and extreme poverty”, said Abul Barkat, an economist and chief researcher of the study, still the only detailed research ever done on the of adverse impacts of the black law.

With departure of the British from Indian subcontinent, the zamindar system, used by the British to regulate land lease and taxation, was abolished under the East Pakistan Acquisition and Tenancy Act.

“Before 1947, most of the zaminders were Hindu and their lands and properties were confiscated by the state with the law. Industries, factories and tea estates owned by Hindu businessman were snatched away. The middle class and lower-class Hindus, those who were spared, came under attack when the EPA was introduced,” said Dasgupta.

Researchers believe the law has contributed to the massive diminution of the Hindu population in what is now Bangladesh.

“Before and after 1947, tens of thousands of Hindus fled to India to escape political and sectarian violence. Even in the following decade, many fled over safety and security concerns. After 1965 and 1971, much of the large-scale Hindu migration, about 70 to 80 percent resulted from the abuse of the EP or VP law,” Shamsul Huda, executive director of the Dhaka-based Association for Land Development and Reform, told ucanews.com.

“The EP or VP has created an atmosphere of social insecurity for Hindus, especially torture and abuse of Hindu women for properties made their lives extremely troublesome,” he added. “Sometimes, it seemed like an ordinary act of terrorism and sexual assault when Hindu people had their homes attacked or their girls raped, but it was a systematic strategy to instill a sense of insecurity among them, to force them to leave their homes and migrate to India.”

During 1971, Hindus accounted for 50 percent of Faridpur’s population, and today, it stands at 20 percent, said Bhobotosh Basu Roy, 62, a local Hindu leader, who is also a victim of the VP law.

“My grandfather and father have lived and died in this country. We also fought and sacrificed for independence of the nation. Sadly, we are forced into discrimination and still fight for legal claim over our property,” Roy said.

With attacks and land grabbing rarely punished, impunity is the order of the day

“The ‘criminal mindset’ of the opportunists, who used this law to torture minorities and were never punished for their wrongdoings, still exists. Despite having a relatively positive law, this mindset and impunity encourage them to carry out torture and attacks on Hindus,” Roy said. When the VP law was revived by the government of Ziaur Rahman, the Land Ministry sent out a confidential circular to district level land surveyors, ordering them to record as many vested properties as they could. Wherever they found Hindu names, surveyors marked and recorded the properties as VP.

This is how many properties with legal heirs like Mitra and Roy were designated as VP. So, the fight to reclaim properties even years after the passing of the return law continues.

“I have won a case to reclaim my property, but I have been asked by local government officials to pay about 40 percent of the value of the property to get it back,” Mitra alleged.

In Faridpur, about 1,200 cases have been lingering in court for years and less than 25 percent are on the way to being resolved, said a local lawyer who asked not to be named as he is currently contesting his own VP claim in court and feared a backlash.

“This has been done by corrupt land officers, to prolong the cases and get bribes from people. Moreover, influential people who are now in possession of the properties, have paid them off to have them on their side,” the lawyer pointed out.

In many cases, the disputes are being treated under common land law instead of VP return law, and not in special tribunals. There are also allegations that victims who won court verdicts to reclaim their properties are being asked to pay five to ten times the actual amount as they move in to pay taxes and apply for land mutation.

“If there were special tribunals, the cases of vested property could be resolved quickly. There could have been a monitoring team from the Land Ministry to oversee the matter and check on corruption. A vested quarter is against it, and so, it’s not happening,” said Huda, the director of the Association for Land Development and Reform.

“There is a very powerful nexus of politicians, businessmen, government officials, lawyers and land grabbers, from the top to grassroots level — all of whom benefit from vested properties, socio-politically and financially. In other matters of interests, they fight with each other, but in cases of VP they have a strong bond. Even the government can’t stop them,” he said.

Several officials at the Land Ministry refused to comment when approached by ucanews.com.

Sarder Sharfat Ali, deputy commissioner of Faridpur, the chief government officer, said they are open to helping victims, but they also face challenges.

“There will always be complexity in dealing with such a sensitive matter and it takes time. We are very positive to return properties to the owner once the court orders it, but sometimes things are not in our favor,” he said.

This means the wait for justice for people like Mitra and Roy is likely to be prolonged.

“Sometimes, I feel like I should move to India, to my relatives out there. But I still want to hang on because this is my motherland — I was born and raised here. I don’t know how long I can keep this feeling,” Mitra added.