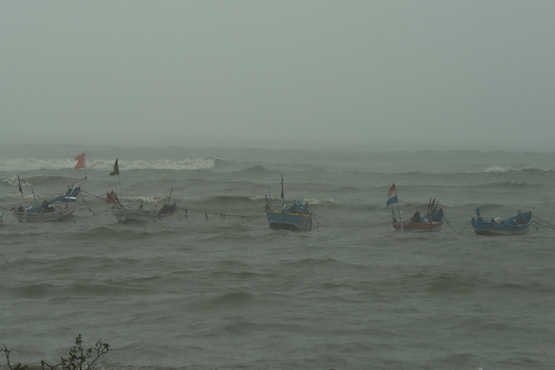 Anchored fishing boats are seen bobbing in the rough seas off Mumbai Dec. 5, 2017 after Cyclone Ockhi moved up the coast. It earlier hit India's southern states killing dozens of people and causing millions of dollars worth of damage. (Photo Indranil Mukherjee/AFP)

A crucifix is placed on old newspapers spread on a rickety wooden bed.

Nearby, along with burning incense, stands the photograph of a rosary-wearing Vinish Vincent.

No one knows for sure whether the 16-year-old is dead or live.

But most people in Vinish's coastal village of Adimalathura in Kerala state assume he has perished.

A surviving companion saw Vinish struggling in the ocean after their fishing boat was submerged by Cyclone Ockhi, which struck on Nov. 30.

As well as an estimted 50 dead, at least 201 people were missing, a local church official said.

The hard-hit archdiocese of Trivandrum, near Kerala's capital, is on a stretch of the Arabian Sea coast, near India's southern tip, which has a large Catholic population.

Black flags and burning incense now dot 80 kilometers of the coastline, which includes villages and tourist facilities from Kovalam to southern Kanyakumari, which comes under Kuzhithurai and Kottar dioceses.

Vinish's family, sitting in the open around his photograph, utter funeral prayers.

But occasionally they rush down to the sea to meet search boats returning with bodies or rescued people.

They hold a glimmer of hope that Vinish might still be alive, or at least of obtaining finality in the event of his body being recovered.

It was poverty that forced Vinish to go to sea, his father Vincent, an ailing retired fisherman, told ucanews.com.

Vinish's elder brothers were all afraid of the ocean, but the younger sibling had happily taken up the opportunity to help his family, Vincent said amid tears.

Father Eugene Pereira, vicar general of the archdiocese of Trivandrum, said at least 50 people had died.

The official government data counted 32 dead and 92 missing in the disaster, but the priest said the official counts are inaccurate.

He said government officials had no record of the number of people at sea when the cyclone hit, but he had been told 201 people were still missing. Father Pereira said his data was based on information provided by villagers, adding that the government had failed to give sufficient warning of the cyclone.

State Chief Minister Pinarayi Vijayan said federal meteorological authorities only warned the state of a cyclone at noon on Nov. 30, when it was already starting to lash the coast.

Vinish and his companions, 36-year-old Sabu and 46-year Muthappan, went to sea as usual on the afternoon of Nov. 29 and were expected to return next day.

However, early on Nov. 30 gusting winds and huge waves struck their boat when they were some 30 kilometers from the coast.

All three started swimming, but after a few kilometers Vinish and Sabu struggled for breath as they battled huge waves, Vincent said quoting Muthappan.

"They disappeared soon," Vincent said recalling the words of Muthappan, who was hospitalized after reaching the shore injured and fatigued.

In the parish churches that line the coast, funeral prayers punctuate the sound of wailing.

For example, the Catholic community gathered in full strength at Valiathura in their parish for the burial of Eappachan, a fishermen whose body was recovered.

Outside St. Antony's church, a brown and grey building facing the beach, a young boy waded through the crowd distributing blue memorial cards that bore a photograph of Eappachan, a balding, clean-shaven man of 63.

An often quoted line from the Gospel of St. John at the top corner of each card read; "I am the resurrection and life. The one who believes in me will live, even though they die."

The Catholic faith sustains believers in such tragedies.

"God has a plan in all this," said Maria Selvam in Vizhinjam village as she stood on the shore holding her grandson with one hand and a rosary with the other.

No one from Selvam's family is missing or dead.

All villagers were like family, she said, a reflection of the close-knit nature of these Catholic communities.

Five centuries ago Saint Francis Xavier baptized their forefathers, laying the foundation of the church in this region.

Successive missionaries under colonial Portuguese rule nurtured local Catholics and spread the faith along the coastline.

Now communities are gathering with families of those who perished or are still missing to sing hymns and say the rosary, the prayer they know by heart.

Shiny (only one name) is faced with the loss of most members of her family, as her husband, son, brother and father are missing, feared dead.

But she continues to pray that they will come home alive.

The Kerala state government has promised to continue search and rescue operations, assisted by the Indian Navy, until all the missing are found or people ask them to stop.

Prayers offered by Vinish's loved ones and many other families continue, but hopes are fading with each passing day.