In Delhi, the pro-Hindu Bharatiya Janata Party (BJP) is adopting a community-based approach as the national capital territory goes to polls next month to elect a new legislature.

While the BJP heads the federal government in New Delhi, it failed to win the Delhi state election five years ago. The newly emerged Aam Admi Party then bagged 67 of the 70 seats in the legislature.

The BJP is desperate to reach out to various sections of society before the Feb. 8 elections, especially given the protests against a controversial amendment the federal government passed, changing the citizenship law.

The BJP’s jovial and soft-spoken president, J. P. Nadda, is reaching out to ethno-linguistic and religious minorities, including Christians.

Early in January Nadda met 15 Christian pastors most of whom expressed unease over the divisive Citizenship Amendment Act (CAA). Critics say the law discriminates against Muslims as it aims to grant citizenship to non-Muslim illegal migrants from Afghanistan, Bangladesh and Pakistan.

Nadda did not forget to mention that he had studied at the Jesuit-run St. Xavier’s school in Patna.

BJP leaders maintain that the aim of the CAA is only to ensure that citizenship is granted to persecuted religious minorities, including Christians coming from the three neighboring countries.

Nadda also met a group of Afghan Christians living in Delhi, a group that will benefit from the new law, which came into force this month.

The BJP’s outreach to Christians is not a new phenomenon. Party leaders feel that despite the campaign — “based on misinformation” — that the saffron party is anti-Christian, its acceptability has increased manifold in the seven north-eastern states, where tribal Christians account for a substantial part of the population.

The BJP is part of the government in the north-eastern states of Tripura, Assam, Arunachal Pradesh and Manipur and Christian-dominated Nagaland, Meghalaya and Mizoram. “Our alliance's regional partners are in power. Christians are not against the BJP as is claimed from time to time,” said Tom Vadakkan, a Christian member of the BJP. 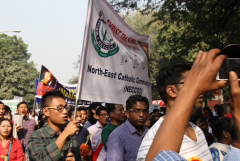 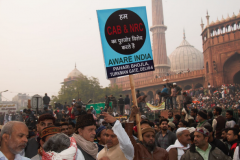 However, V. Lal, an office-bearer of the Evangelical Fellowship, says “Christians in India are facing the brunt of nationalism, more precisely Hindu nationalism” promoted by the BJP.

In retrospect, many Christian leaders and tribals in the northeast have ill feelings toward the Narendra  Modi government and are skeptical about assurances regarding the safety and security of Christians.

Christian leaders point out that changes made by the central government to the Foreign Contribution Regulation Act have affected church bodies as funding has been hit. "Bit by bit we are feeling the pinch,” Reverend J. R. Sangma, general secretary of the Garo Baptist Convention, told UCA News in 2018, when his Meghalaya state went to the polls.

In the elections the Hindu nationalists only won two of the 60 seats, but its alliance partner NPP, headed by Conrad Sangma — a Christian — now runs the government with the BJP as part of the coalition.

"I think Modi was not able to convince people about his government's approach to minorities. We feel alienated. The prime minister's statements sound more like lip service," Reverend Sangma said.

But as the Delhi poll approaches, the BJP is reaching out to several communities including Sikhs, Christians and also powerful ethnolinguistic groups such as the Biharis from eastern India and Jats from the north, who form a substantial community in Delhi.

Biharis and some communities from eastern Uttar Pradesh are also called ‘Purvanchalis’ and are estimated to form about one-third of Delhi's 14.6 million eligible voters.

“On the eve of the polls, the BJP is realizing that it has lost a large section of middle-class support due to protests over the CAA,” said political observer Vidyarthi Kumar. “But there is a vital factor — the BJP’s poll managers realize that in the event of a clash between linguistic identity and Hindu nationalism, many Delhi voters prefer to swear by their mother tongue and could even shun the aggressive nationalism of the saffron party.”

The Feb. 8 elections in Delhi will not pose an immediate threat to Modi. But it is certain that the outcome will be politically crucial as a poor showing by the BJP will give opponents the chance to claim that his popularity is on the wane, especially among the middle classes.

Modi and his poll managers have successfully brought in theatrics, blending economic development with zealous Hindu nationalism. Can he still do it?

Over the last two decades, Modi has enhanced his acceptability among the middle classes and in two subsequent polls — 2014 and 2019 — people voted to keep the strongman in power.

Several BJP leaders have expressed apprehension that the middle classes are notorious for rejecting their heroes with or without notice — and they do so very quickly.

BJP insiders say Modi's ability to make quick decisions endeared him to the middle classes as they also want improvement in governance and a modernized economy, possibly with greater involvement from the private sector. However, no one can be sure which way the ultimate sentiment of this section will go in the long run.

In 2019 national elections, the BJP swept all seven parliamentary seats in Delhi. If the saffron party fails this time around, Modi and his home minister Amit Shah will be on the receiving end.

“For the first time in years, the government of India's Prime Minister Narendra Modi is playing defense,” Mihir Sharma commented in the Times of India.

Nirendra Dev is a senior journalist based in New Delhi