Jammu and Kashmir Chief Minister Mehbooba Mufti speaks during a press conference after submitting her resignation in Srinagar on June 19. (Photo by Tauseef Mustafa/AFP)

The government in Muslim-majority Jammu and Kashmir state has collapsed after India's pro-Hindu party withdrew its support for the ruling alliance in what is widely seen as a move to revive the party's Hindu political card in the run-up to the national election next year.

BJP spokespersons told media that it had become untenable to continue in a collation government that could not take a harsher stand against Islamic militants trying to free the state from Indian rule.

BJP spokesman Sunil Sethi told media that terrorism has been increasing since the government come to power in March 2015. "We wanted to deal with the situation strongly. Everyone was suffering due to this situation. We had to take a call for the interest of the nation," he said.

Modi has always favored tough military action against militants but the state's Chief Minister Mehbooba Mufti often created hurdles by her "soft or middle path" in trying to offer a "healing touch" to warring Muslim groups, the BJP said.

The BJP move, that stresses action against Islamic terrorists, has wider ramifications for the national election in the Hindu-majority nation due in April 2019, say observers.

"In the name of a healing touch in Kashmir, the PDP-led government was often giving wrong signals. Our core voters were irked at such appeasement policies," BJP leader Jagdambika Pal told ucanews.com.

Immediately after the BJP withdrew the support of its 25 legislators in the 89-member state legislature, Mufti announced her resignation and said "a muscular policy" cannot work and Kashimir cannot be treated like an "enemy territory."

The state, where no party or coalition has a majority to rule, will now come under the direct rule of Indian President Ram Nath Kovind. The administration will work under his state representative, governor Narinder Nath Vohra.

BJP strategists feel the decision will help the party project itself as standing against Islamic violence "in the soil of India," making it the darling of India's middle class. 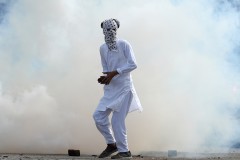 The move is crucial to the BJP's election strategy, particularly as the Modi government is accused of failing to achieve economic development and job creation promised in the last election in 2014, say opposition leaders.

Sanjay Raut, spokesman for BJP ally Shiv Sena, said Modi's party must have realized that its alliance with the PDP — a party seen as supporting Muslim interests in the state — would cost it dearly in the national election.

Communist leader Sitaram Yechury told ucanews.com: "The BJP was party to all decisions of the state government and hence cannot absolve any responsibility for contributing to a further deterioration in the state and to the deepening alienation of the people."

Congress president Rahul Gandhi tweeted to say that that alliance government "set fire" to the state, "killing many innocent people including our brave soldiers. It cost India strategically and destroyed" years of hard work by his party.