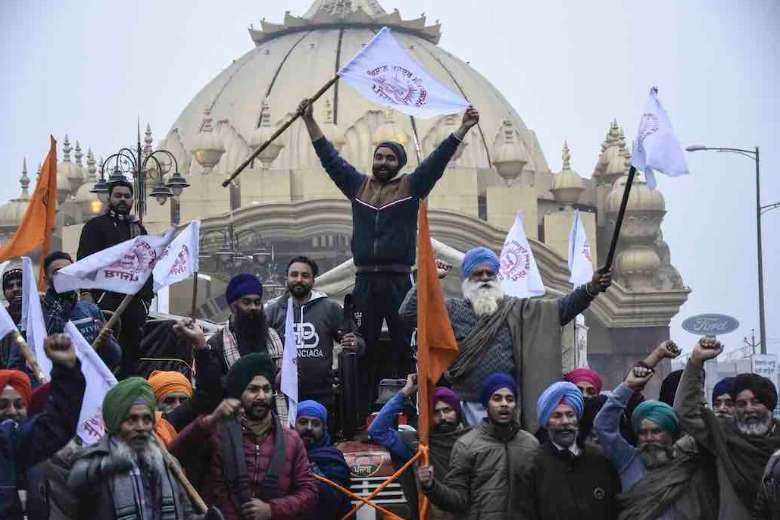 Farmers shout slogans as they leave Amritsar for Delhi on Jan. 12 to participate in a continuing demonstration against the central government's recent agricultural reforms. (Photo: Narinder Nanu/AFP)

The top court on Jan. 12 ordered the formation of a committee of experts to hold talks with the federal government and farmers to end the stalemate as the main protest on New Delhi's outskirts entered its 48th day.

"The Supreme Court order gives some hope to the farmers who are protesting in very adverse conditions," said Bishop Alex Vadakumthala, chairman of the Indian bishops' office of labor.

"The government should find an amicable solution and end the protest as it is not good for any country to let their farmers struggle in the open for their genuine demands," the prelate told UCA News on Jan. 12.

Thousands of farmers from Punjab and Haryana states marched to New Delhi on Nov. 29 demanding the government repeal laws that they say work against their interests. When authorities blocked their entry to the capital, they sat on the highways to block major entry and exit points to New Delhi.

The government, led by the pro-Hindu Bharatiya Janata Party (BJP), disregarded opposition to pass the bills, saying they are necessary to reform the farm sector and help farmers have the freedom to sell their products in an open competitive market and gain maximum profit.

Farmers' unions say the laws take away the minimum support price (MSP) or the government guarantee for their products besides giving private businesses unrestricted opportunities to purchase and store produce.

Critics say the laws were designed to help multinational companies and would lead to the collapse of government-controlled markets and leave farmers at the mercy of big business houses.

Government lawyers told the court that the new laws were drafted and implemented based on two decades of studies and disagreed with the farmers' demand for their repeal.

The panel of three judges, including Chief Justice S. A. Bobde, expressed displeasure with the way the government had handled the issue. The court said either the government should suspend the controversial laws or the court must intervene to suspend them.

Bishop Vadakumthala said the court order "can be a way forward for finding a permanent solution for the impasse," he said, welcoming the court order to establish a committee to talk to both sides for a solution.

According to reports, more than 50 farmers have died during the protest on account of ill-health and inclement weather as they spend nights in the open in northern India's peak winter season.

The government held eight rounds of talks with them for a settlement but failed to cut the ice as the farmers agreed with nothing less than the controversial laws' repeal.

More than 70 percent of India's 1.3 billion people depend on farming for a living, with most small scale farmers having less than one hectare of land.

Farmers' leaders say forcing small-time farmers to face the competition of corporate giants will lead to widespread hunger and poverty.

The farmers' union leading the protest is yet to make its official response to the court order.