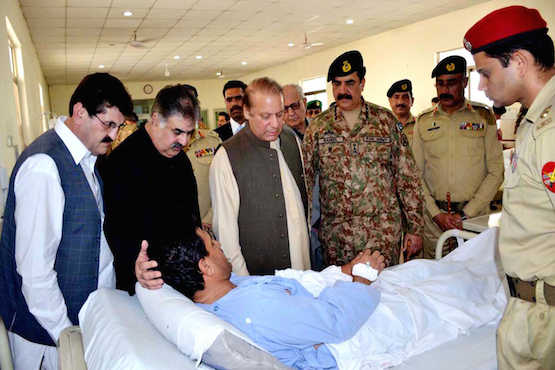 Catholic Church leaders have criticized the Pakistani government for inadequate security measures that led to the massacre of over 70 people in the country's restive Balochistan province.

More than 70 people were killed and over 100 others injured Aug. 8 at the civil hospital in Quetta where lawyers and journalists had gathered to pay their respects to a prominent lawyer who was shot dead a few hours earlier and whose body was bought to the hospital.

Media quoted that a faction of the Pakistani Taliban which had carried out the Easter Bombing in Lahore in March as being behind the bombing. Separately, the so-called Islamic State terror group is also taking claim to the Quetta bombing.

"The Catholic Church stands firmly with the people of Balochistan in this hour of need and further pleads with the government to bring the perpetrators of this heinous crime to justice," said the Pakistani Catholic bishop's justice and peace commission in a statement.

Bishop Joseph Arshad of Faisalabad, chairperson of the commission, Father Emmanuel Yousaf Mani, its national director and Cecil Shane Chaudhry, the commission's executive director, signed the statement that also condoled with the grieving families, and said that Catholics were praying for the deceased and for the speedy recovery of those injured in this "cruel incident."

They emphasized that the Pakistan government needs to improve its security measures and ensure the right of life for all its citizens. The killing of innocent people is an inhuman act and totally unacceptable, they said.

Balochistan has experienced 1,400 such incidents of violence and targeted killing over the past 15 years, they said.

Father Maqsood Nazir, parish priest of St. Pius Church in Quetta who held the funeral for a Catholic lawyer Arthur Victor, 58, killed in the blast said "targeting a place like an hospital is inhuman and barbaric."

He urged the government to do more to uproot terrorism from the country.

Prime Minister Nawaz Sharif, who flew to Quetta hours after the blast, directed all state security institutions to respond fully to eliminate terrorists.

Balochistan, the country's southwestern province, has witnessed many a military offensive aimed at insurgents which has resulted in many casualties.

Balochistan is Pakistan's largest, poorest and most underdeveloped province, although it is the country's major source of natural gas. The province also has the smallest representation in parliament. Tribal groups in the province have been demanding more political autonomy and a greater share of revenues from the area's resources, most of which go to the central government.