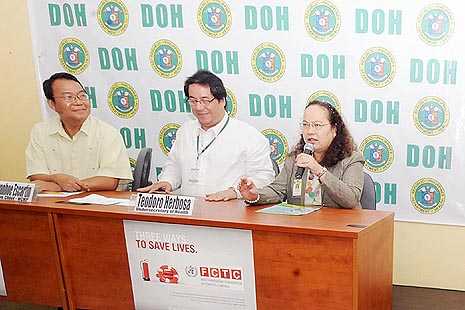 Health officials announcing the observance of No Tobacco Day on Monday (Photo: Department of Health)

Two bishops today joined the anti-tobacco campaign in Metro Manila, saying the smoking ban in public places should be implemented nationwide. In separate interviews on Church-run Radio Veritas, Bishop Jose Oliveros of Malolos, head of the Episcopal Commission on Bio-Ethics of the Catholic Bishops’ Conference of the Philippines, and Bishop Honesto Ongtioco of Cubao said smoking is harmful not only to smokers but also to non-smokers. On Monday, the Metro Manila Development Authority (MMDA) started a drive to enforce a smoking ban in public places. People caught smoking in public areas were only given warnings. “This is just the information campaign period. Next month, we will start imposing penalties,” said MMDA chief Francis Tolentino. The ban, however, can only be enforced in areas where the local councils have ordinances penalizing smoking in public places. Sixteen of the 17 local councils in Metro Manila have such ordinances. Public places where smoking is banned include public government buildings, churches, schools, hospitals, public utility vehicles, terminals, jeeps, tricycles, bars and restaurants. “I am in favor of the smoking ban because we have to protect the health of the public,” said Bishop Oliveros in an interview on Church-run Radio Veritas. “I think so. Children inhale secondhand smoke in parks and it is not healthy. People get cancer even if they are not smokers because they get it from the environment,” said Bishop Ongtioco in a separate interview. The two bishops also suggested additional taxes on “sin products” like cigarettes and alcoholic beverages to discourage consumption. “That way, the government will also earn more revenues. We help the individual and the government also benefits. I see the wisdom in prohibiting smoking in public places, which we should have done before. Labels such as "Smoking is dangerous to your health" help. In Malaysia the warning label on the cigarette packet is very graphic and scary. This is required by the law of Malaysia. If Malaysia can do that, why can’t we do that here?” said Bishop Oliveros. PM14384