Public bays for blood, Catholics pray for peace as tension escalates on India-Pakistan border after worst attack in 30 years 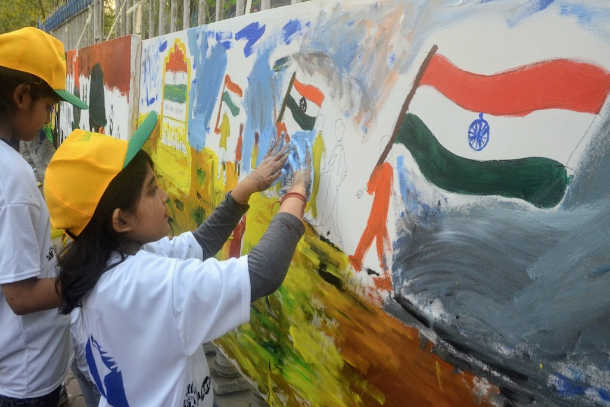 Girls participate in a painting programme in Kolkata on Feb. 17 to pay tribute to the 40 troops killed in a militant attack on Valentine's Day in Jammu and Kashmir's Pulwama district. (Photo by IANS)

Tension has again been ratcheted up in the border areas of India and Pakistan as their respective armies stand eyeball to eyeball while Indian Catholics pray for an end to the conflict.
Diplomatic ties between the nuclear-armed neighbors hit a new low in February after a suicide bomber killed 40 Indian soldiers on Valentine's Day in Kashmir's southern Pulwama area by targeting a cavalcade.
Delhi blamed Islamabad for sponsoring the attack, which left dozens more wounded.
The Pakistan-based militant outfit Jaish-e-Mohammad (Army of Prophet) subsequently claimed responsibility. Nineteen-year-old Kashmiri Adil Ahmad Dar has been identified as the bomber.

Both countries have laid claim to the Muslim-majority region of Kashmir since India's partition in 1947, which has led to three major wars and triggered numerous lower-level skirmishes.

On Feb. 18, four soldiers, three militants and a civilian were killed in a gunfight between militants and army troops in the same state, considered a hotbed of militancy as insurgents fight to free the region from Indian control.

Prime Minister Narendra Modi and leaders of his pro-Hindu Bharatiya Janata Party (BJP) have resolved to avenge the two strikes, casting them as assaults on the Indian public in general.

"I would like to say the fire that is raging in your bosoms is in my heart as well," Modi said while addressing a political rally in Bihar. He expressed his condolences for the fallen troops and promised retaliation.

Prayers for the departed

Bishop Ivan Pereira of Jammu-Srinagar, under which jurisdiction Kashmir falls, described the two attacks as "cowardly." He called on Catholics to "pray for the departed souls and also for the return of peace in the state."

He also appealed for calm and religious tolerance amid reports that Kashmiri people in other parts of India may be at risk as the public seeks revenge.

"We should stand together and must not allow anyone to divide us on the basis of religion or creed. This is the time when we have to foil the nefarious designs of criminals," Bishop Pereira said.

Christians responded by holding candlelight vigils in several cities including Bengaluru and Kolkata.

In Bengaluru, Jesuit-run St. Joseph College organized a public program to express solidarity with the families of the slain soldiers using patriotic songs, mimes and speeches that stressed peace and unity.

Kolkata Archdiocese's Catholic Association of Bengal joined other Christian groups in the city in organizing a "triple tribute" to the fallen soldiers during a three-day program.

It started with a candlelight procession on Feb. 18 and was followed the next day with prayers at the tomb of Mother Teresa, who was based in the city.

Another program scheduled for Feb. 20 in Kolkata was scheduled to include an ecumenical service.

"We want to tell the families of the dead and injured soldiers that at this time of their irreparable loss, we are with them; the whole nation is with them," said Angelina Jasnani, president of the association.

Other marches and protests have been taking place across the nation.

But while Pakistan has been widely rebuked for exporting terrorism to Indian soil, Islamabad has challenged India to provide proof of its involvement in the latest attacks.

The armed insurgency in Kashmir started in 1989. Indian attempts to suppress the conflict have resulted in an estimated 100,000 deaths since then, but official records put the number at 47,000.

Mumbai-based Christian leader Joseph Dias said India's political system is the biggest hurdle in resolving the crisis in the state.

"War and violence are not a solution. There are other options such as dialogue and reconciliation through which we can make peace sustainable and better people's lives in the future," he told ucanews.com.