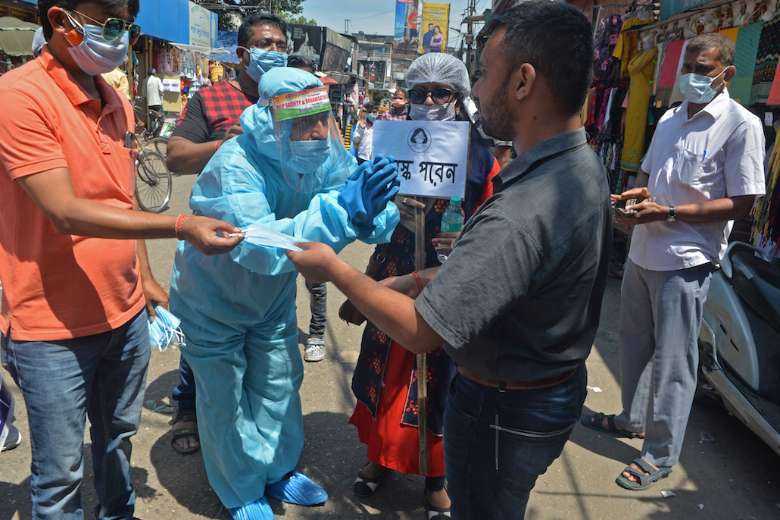 A volunteer wearing protective gear urges people in a market to wear masks as part of an awareness drive against the spread of Covid-19 in Siliguri in India's West Bengal state on April 23. (Photo: AFP)

Catholic leaders have urged their people across India to strictly follow Covid-19 restrictions as they dedicated a day of prayer to contain the infection spreading like wildfire.

Catholic Bishops’ Conference of India president Cardinal Oswald Gracias of Mumbai has written to bishops asking them to hold a day of prayer and fast on May 7 seeking divine intervention to save the country from the spreading pandemic.

“We are recording around 300,000 new cases of coronavirus every single day. The second wave has hit us like a tsunami and we are yet to reach the peak,” his April 22 letter said.

“Added to this is the apparent lack of planning, resulting in a shortage of hospital beds, antiviral drugs, oxygen and vaccines. It could get worse before it gets better.”

Cardinal Gracias urged people to follow Covid-19 protocols such as wearing masks, maintaining physical distancing and sanitizing hands as well as adhering to restrictions and curfews imposed to break the chain of infections.

The prelate also wants everyone to get vaccinated against the viral disease.

India’s Supreme Court described the second wave of the pandemic as “a national emergency-like situation” and issued a suo moto notice asking the federal government to explain its preparedness to deal with the crisis.

The top court’s initiative came on April 22 as the nation recorded 332,348 positive Covid-19 cases and 2,264 -19 deaths. The cases came from 1.6 million tests conducted across the country.

Observers and media reports say the actual number of infected people could be much higher as many with symptoms are not taking a test or going to hospitals because health facilities are overwhelmed.

Hospitals are reporting a lack of beds and facilities as administrations in several places have issued guidelines for people to treat themselves at home.

At least 20 Covid-19 patients died on April 23 night in a Delhi hospital due to a shortage of medical oxygen, an official told media.

That followed the deaths of at least 35 coronavirus patients this week from an oxygen leak and fire at two government hospitals in Maharashtra state, one of the worst-hit states in India.

For instance, Bhopal city, the capital of the central state of Madhya Pradesh, reported five Covid deaths on April 22. But on that same day crematoriums in the city cremated 117 bodies under Covid-19 protocols, reported Navduniya, a local Hindi daily newspaper.

Such under-reporting is also reported from other states such as Gujarat after long queues of ambulances carrying dead bodies were found in front of crematoriums.

“We are passing through a very critical situation in our country with so many people dying of infections daily,” Archbishop Prakash Mallavarapu, chairman of the Indian bishops’ healthcare commission, told UCA News on April 23.

“It is true our medical facilities are crippled and now people will have to take care of themselves following Covid-19 protocols.”

Critics have accused the federal government of mismanaging the pandemic.

“It is a time we need to untidily fight against our enemy rather than blame anyone at this juncture,” Archbishop Mallavarapu said.

“Now our people are dying. We all need to join hands to extend all cooperation to the government and other agencies to fight the pandemic.”