They say an attempt is underway to erase distinctions between truth and falsehood, reality and fiction, good and evil 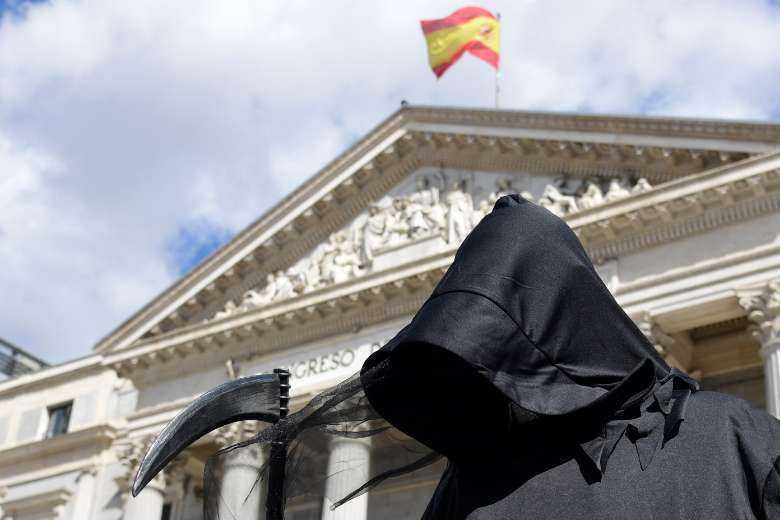 A protester dressed as Death demonstrates in Madrid on March 18 as Spain's parliament gave final approval to a bill decriminalizing euthanasia and physician-assisted suicide. (Photo: AFP)

Spain's Catholic bishops have warned of growing division and tension in their country over government attempts to "deconstruct and dismantle the Christian worldview."

"We are in a difficult moment, not only because of COVID-19, but because we are convulsed by a deep institutional crisis, with some groups seeking to open a new constitutional phase and replace a political framework that has given Spain great stability," the bishops' conference said.

"Legislative initiatives by the coalition government on education, euthanasia, abortion, democratic memory and the judiciary reflect a global deconstruction project, whose development puts freedom at risk and impedes essential unity."

The warning was contained in a 95-page statement, published July 28, setting out pastoral guidelines for the Spanish church from now until 2025.

The bishops said an attempt was underway to "erase distinctions between truth and falsehood, reality and fiction, good and evil."

"With its prophetic mission, the church is obliged to denounce these attacks on freedom and justice, to act as a channel of encounter and reconciliation," the bishops said. They added that "Spaniards are no longer living in a culture inspired by the Christian faith. For many, Christian truths have become incomprehensible, as moral standards flowing from the Gospel also become unacceptable."

The statement was released two days after Spain's co-governing Socialist Party confirmed plans to review a series of 1979 accords with the Vatican and adopt a "statute of secularism," enforcing "strict separation between politics and religion, law and morality, crime and sin."

The bishops said society was full of distrust and confrontation, as digitization, artificial intelligence and surveillance technologies fueled "spiritual impoverishment." They warned of a type of capitalism that does not just regulate production and consumption, "but also imposes values and lifestyles."

"Everything is becoming a function of subjective perception and the interests of power groups, as objective truth and goodness depend ultimately on those who can impose their will, and as the weakest and poorest are excluded."

A draft "Trans Law," enabling people over age 16 to re-register their gender through a court declaration without medical or legal procedures, was approved in June. A Democratic Memory Law, approved July 20, is expected to spur demands for the removal of Catholic monuments believed linked to the 1939-1975 dictatorship of Gen. Francisco Franco.

Although many Catholics had shown "generosity, closeness and pastoral creativity" during the pandemic, evangelization had been made difficult by eroding family bonds and a loss of trust in the church, the bishops said, adding that many lived "as if God did not exist."

"The pandemic has highlighted many existing problems: homeless people, the lonely elderly, inhumane conditions facing temporary workers and immigrants, as well as a crisis of representative democracy," the bishops said.

"Spain's Catholic community lives immersed in this cultural and social process and is experiencing its consequences. ... Although the church's mission is supported by the action of the Holy Spirit, our coherence of life requires us to overcome the mistrust installed in broad sectors of our society."

Preaching July 25 at a Mass attended by King Felipe VI and his family, Archbishop Julián Barrio of Santiago urged Spaniards to avoid "substituting reality for ideology."