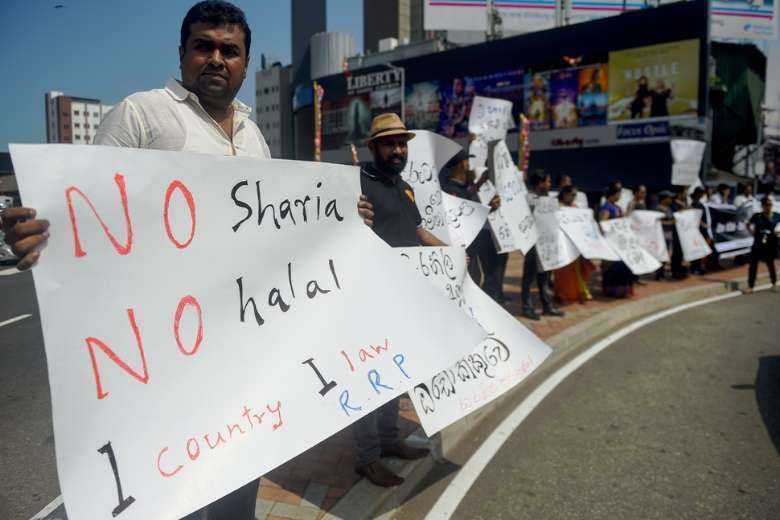 Sri Lankan protesters hold placards against Islamic Sharia law at a demonstration marking the one-month anniversary of the Easter Sunday attacks in Colombo on May 21, 2019. (Photo: AFP)

Sri Lankan bishops have urged the government to give up its plan of introducing a "one country, one law" concept in the island nation and called for drafting a new constitution.

The decision was in keeping with an election slogan of Rajapaksa in 2019 when he was elected president with overwhelming support from the country’s Buddhist majority.

According to an extraordinary gazette notification issued by the president, the task force is required to submit reports to the president once a month and the final report on or before Feb. 28, 2022.

Bishop J. Winston S. Fernando, president of the Catholic Bishops' Conference of Sri Lanka, has urged the repeal of the gazette notification for the appointment of the task force.

In a statement issued on Nov. 2, the prelate called the leaving out of Tamil, Hindu, Catholic and other Christian minority groups from the task force a lost opportunity.

He further pointed out that “to appoint a person without considering any past records to the chair of the presidential task force is [adding] an insult to injury.”

Ven. Gnanasara Thera is known for his anti-Muslim stance and his Bodu Bala Sena (BBS), or the Force of Buddhist Power, was implicated in anti-Muslim riots in 2013.

"The appointment has been made without any consultation of the legislators and it is a disregard for the legislature," said Bishop Fernando.

He strongly emphasized that the gazette notification “should be repealed and a new constitution should be drafted to ensure that all the citizens are treated equally before the law.”

A hardliner, Ven. Gnanasara Thera was sentenced to a six-year prison term for contempt of court last year after shouting at a judge for holding him guilty of accosting the wife of missing journalist Prageeth Ekneligoda.

However, he was accorded a presidential pardon within a few months of starting the prison term.

Opposition groups and analysts also criticized the decision of the government.

Jesustoday.lk, a news website, said that "one country, one law" is likely to be a dangerous slogan that will erase diversity and make the will of the majority the only law.

“All citizens should be equal before the law. This is not what is hidden in the slogan,” it said.

The news website further pointed out that the controversial monk heading the task force “has issued hate speeches to a significant number of people in this country.”

Harin Fernando, an opposition lawmaker, said the appointment of someone like Ven. Gnanasara Thera exposes the political interests of the government.

“The task force is governed by someone who has been indicted by the Presidential Commission of Inquiry into the Easter Sunday attacks,” alleged Fernando.

Ven. Gnanasara Thera maintained that he hoped to exchange views with all political parties, religious and civil society organizations. “The aim of this task force is to build the environment for all including Sinhala, Tamil, Muslim, Buddhist, Catholic, Hindu and Muslim to live together under one law and country,” he said.

Sri Lanka has witnessed strong opposition by nationalist groups in recent years to attempts to introduce Sharia law in the country, saying it would promote Muslim extremism.

RANJIT YAWU
The constitution of Sri Lanka, Article #10 states that every person in Sri Lanka is entitled to freedom of thought, conscience & religion while Article 12(1&2) assures a right to Equality. What more can the people expect by the appointment of Buddhist monk, the Ven. Galagodaaththe Gnanasara Thera as Chairman of a Presidential task force named one country, one law. His credentials - https://www.ucanews.com/news/sri-lanka-releases-hard-line-buddhist-monk-from-jail/85260# Jeremiah 13:23 can predict the future. Only faith in a loving God will assure our hopes – Hebrews 11:1.
Reply