In a rare show of solidarity, three prelates from the Latin Archdiocese of Trivandrum went without food and water for the day 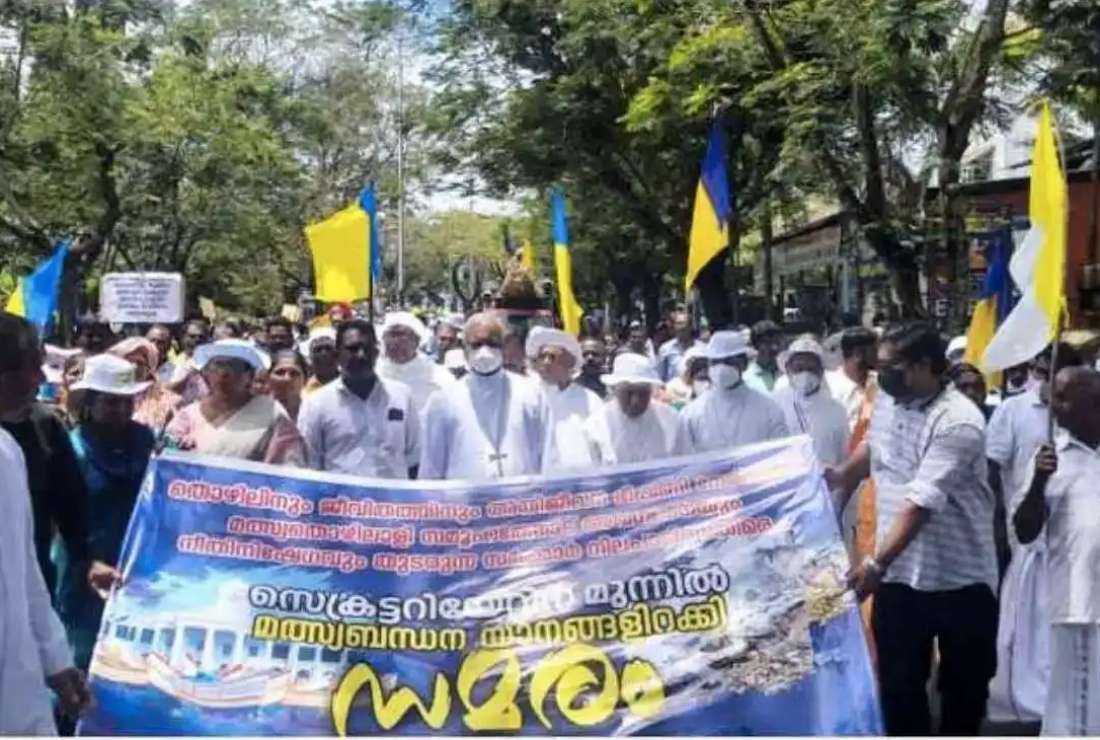 Archbishop Thomas Netto of Trivandrum (center) leading the protest of fishermen, who want the government to halt the construction of a port project in the southern Indian state of Kerala. (Photo: supplied)

The hunger strike at the Vizhinjam Adani port construction site on Sept. 5 was launched by a Muslim cleric, Palayam Imam V.P. Suhaib Moulavi, who pledged support to the just cause of fishermen in Kerala.

The three prelates spent the entire day at the venue of protest without food and water in solidarity with the fishermen and vowed to intensify the protest as the government refused to accept their demand for halting the construction work until an impartial environment impact assessment of the port construction is done.

“We will not give up our protest until the government accepts our demands,” the 76-year-old Archbishop Pakiam said.

The Latin Archdiocese has been spearheading the protest since July 20 after the government failed to respond to the fishermen’s demand for rehabilitation and resettlement, especially those who lost their houses and means of employment due to coastal erosion after the port construction started in 2015.

The retired archbishop has been a strong backbone for the causes of fishermen in this archdiocese.

“I lead a retired life. I joined this hunger strike even though I am unwell as I strongly feel for the causes of the fishermen… I have difficulty speaking. I do forget,” he said and began to read out from a prepared text amidst thunderous applauses from the protestors.

Archbishop Pakiam refuted the allegation that the Church was sitting idle until now and is creating hurdles when the private company had invested huge sums of money into the project.

“We never agreed to this project. We always opposed it right from the beginning,” he said in a feeble voice.

He said the government had ignored their demands despite the Church having conducted studies on the project's social and environmental impact. Experts had warned of serious coastal erosion and damages to houses and other properties of the fishermen. The government, however, got favorable reports from hand-picked experts, he added.

A cabinet sub-committee constituted by the Kerala government held a dialogue with the leaders of the fishermen on Sept. 5 but failed to reach any consensus on stopping the port construction work.

Vicar General Father Eugene H Pereira said the protest will spread to the entire state as Catholics from other dioceses including bishops and priests, had started to visit Vizhinjam to pledge their solitary.