Years of neglect have left thousands who fled homes from across Asia increasingly vulnerable, they say 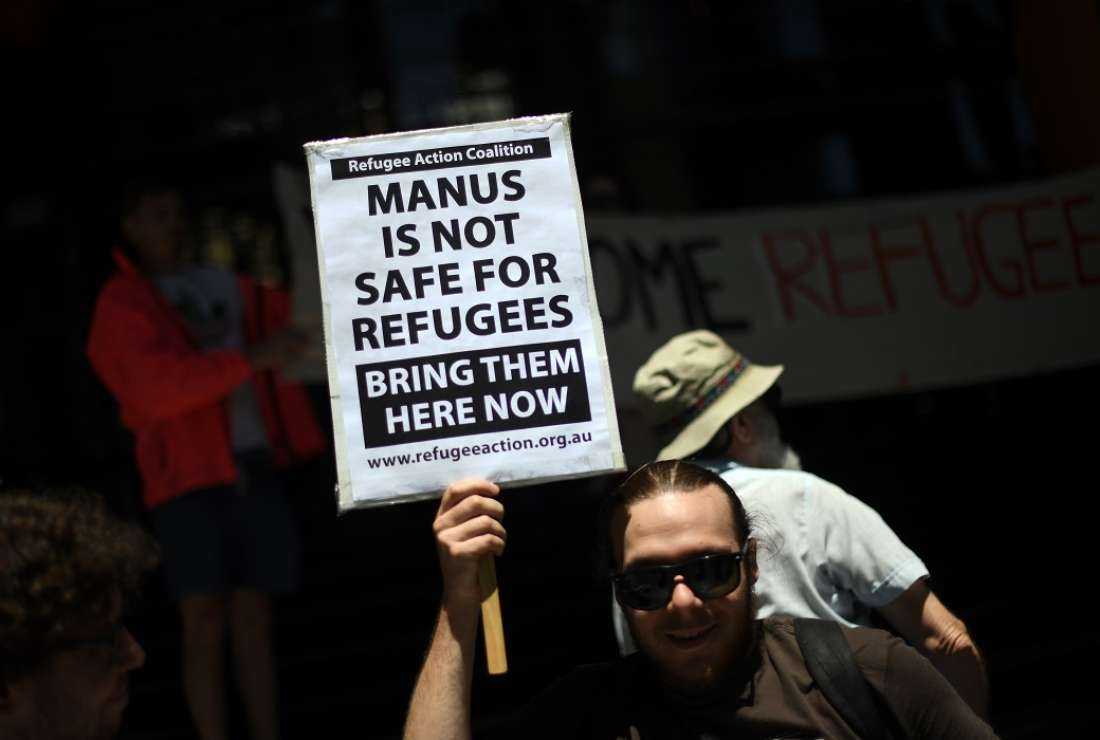 A refugee advocate protests the closure of asylum seeker camps in Papua New Guinea in front of the Commonwealth government offices in Sydney, Australia, on Oct. 31, 2017. (Photo: AFP)

More should be done to ease the plight of refugees and asylum seekers in Papua New Guinea (PNG), including those from Indonesia's Papua region who fled their homes because of political and security problems, according to the Bishops' Conference of Papua New Guinea and the Solomon Islands.

In a statement to mark World Refugee Day on June 20, signed by the conference secretary-general, Father Giorgio Licini, the bishops said these asylum seekers and refugees have been neglected for years and as such are “vulnerable people exposed to more risks.”

The priest, a member of the Pontifical Institute for Foreign Missions (PIME), said about 12,000 Melanesians from Papua are now living in PNG, mainly in the National Capital District (NCD) and in Western and Sandaun provinces, who find it difficult to integrate within society.

“Prolonged refugee processing, lack of government-issued identity documentation and, importantly, land concessions” are some of the major issues that continue to hold these people back, he said.

He pointed to more than 200 families from Papua living in squatter settlements in PNG capital Port Moresby who face the imminent threat of eviction.

“In fact, some of them have been evicted five times from one place to another,” he said. “This is a painful story, at least as painful as taking children out of school, going without food for days and sleeping in the cold in parks.”

He also raised the issue of 1,523 men forcibly transferred to Manus Island from Australia in 2013 under a resettlement agreement. Some 104 remain in PNG, mainly of Middle Eastern and Asian origin including Pakistanis and Bangladeshis.

“There is a particular and extreme concern for the elderly and a dozen with a variety of chronic health issues whose conditions will soon descend into utter despair and physical destitution,” Father Licini said.

The priest also addressed the plight of internally displaced persons (IDPs) being forced from their homes because of sorcery accusations, conflicts, natural disasters and the impacts from climate change and rising sea levels.

“Refugees, IDPs, migrant workers and victims of human trafficking, they all need to be protected and supported by the government and those in a position of making decisions for the people"

“The government and all stakeholders including churches must work together for these people,” he added.

Father Licini said this year's World Refugee Day theme, “The Right to Seek Safety,” reminds us that “we need each other.”

“Refugees, IDPs, migrant workers and victims of human trafficking, they all need to be protected and supported by the government and those in a position of making decisions for the people,” he said.

Yuliana Langowuyo, executive director of the Secretariat for Justice, Peace and Integrity of Franciscan Creation in Indonesia’s Papua region, said Papuans who fled to PNG did so mainly due to political and security issues in the region that have existed since it became part of Indonesia in 1963.

"If it wasn't for political problems, they would not run away. They would prefer to live on their own land," she said.