President Mnangagwa urged to welcome all the opposition parties 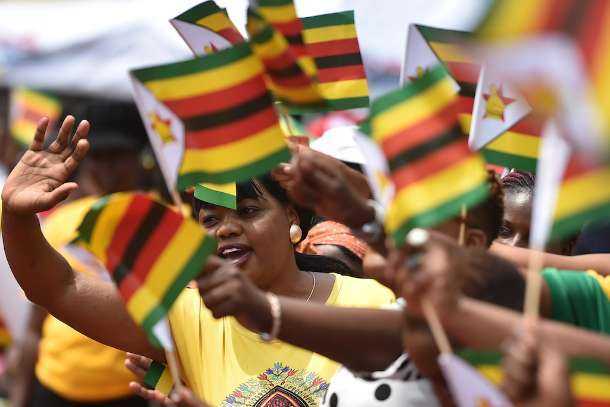 People react as Zimbabwe's new President Emmerson Mnangagwa is officially sworn in during a ceremony in Harare in November 2017. (Photo: AFP)

The Zimbabwe Catholic Bishops’ Conference (ZCBC) has urged President Emmerson Mnangagwa to show “political charity” and “extend a hand of welcome to all the opposition parties.”

In their pastoral letter released last week ahead of the Advent season, the bishops stressed solidarity, national cohesion and reconciliation in the strife-torn southern African country.

“If we are to care truly for each other, we need to begin by looking at the relationship between people. A true human and humane community can break out of the indifference brought about by consumerism and lack of political charity,” the prelates said.

“Politics without charity can never bring about the common good.”

The bishops’ call to the president assumes significance as Harare has sought help from South Africa and Kenya to extradite former Zanu PF G40 members who fled the country after Mnangagwa seized power in a military coup in November 2017 which removed the now late Robert Mugabe from office.

The bishops said they were moved by the word Advent, meaning “behold I come.”

“Prepare the way for the Lord, make his path straight [in all] sociopolitical, economic and religious spheres of life. It is the Lord Jesus who comes to live among us in order to renew us,” the ZCBC said.

“The coming of the Lord is also a coming of new things, new ideas, a renewed hope in him and in each other and what we are capable of doing together if only we can trust, reach out and find each other across our set social and political boundaries.”

In July, the bishops came under fire from the government after they sought an end to abducting political activists, torture and corruption.

An angry Mnangagwa responded by terming the bishops unholy and challenged them to join him in the political arena.

Highlighting the difficulties by Covid-19 pandemic, the bishops stressed the need for social relationships that are a “genuine acknowledgement of the other that is made possible by love alone.”

“If we are to care truly for each other, we need to begin by looking at the relationship between people,” the bishops said.