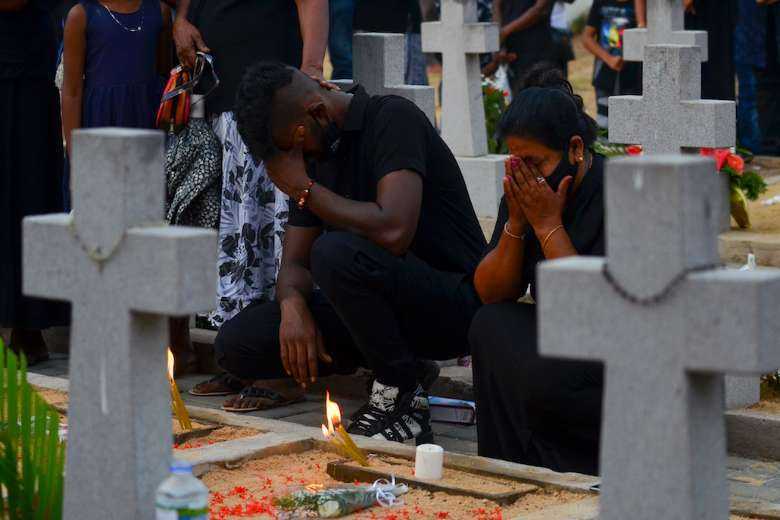 The congregation of St. Sebastian's Church in Katuwapitiya, which was targeted in the Easter bombings of 2019, hold a protest on the second anniversary of the attack on April 21 demanding justice for those who lost their lives. (Photo: AFP)

Catholic bishops have given Sri Lanka's government a one-month deadline to answer their letter sent on behalf of victims of the 2019 Easter Sunday bombings.

They have warned that they will be forced to agitate for action through alternative ways if their ultimatum is not met.

"It is the right of the people to know the conspiracy behind the Easter Sunday attacks and the government’s responsibility is to expose it to the country immediately," Cardinal Ranjith said at a press conference in Colombo attended by several prelates on July 13.

"The investigations into the Easter attack were carried out carelessly. An independent active investigation should be conducted rather than the current one. We urge the government not to brush the issue under the carpet by taking a few people to court."

The bishops' letter questions whether the cases to be filed against 42 suspects include the main culprits who masterminded the attack.

“It is now 26 months since the Easter Sunday bomb attack of April 21, 2019. And by now nearly five months have gone since the presentation of the final report of the Presidential Commission of Inquiry appointed to investigate this attack," the letter stated.

“Yet we are truly saddened by the lethargic pace at which the state machinery is moving in order to find those who are responsible for these attacks; those who planned it and those who, even though they had forewarning about it and could have easily prevented it, did not fulfill that responsibility, and willfully neglected it, and bring them before the law.

“We are faced with the puzzle as to why and for what reason those in authority are delaying or neglecting their duty in implementing the recommendations of the Presidential Commission of inquiry, which has cost the pubic millions of rupees."

The letter warned that if authorities were attempting to file action only against some marginally involved figures, the "big brains" behind the attacks and those who helped them by neglecting their duties would be freed of their culpability.

“If that happens, it would not only be tantamount to a serious crime of the denial of justice to the 269 innocents who were assassinated in these murderous attacks, to all those relatives of the victims who have been aggrieved by their deaths, and to those thousands who have been rendered destitute by reason of their injuries. It would also constitute a grave threat to national security,” stated the 17-page letter addressed to the president.

"We hope that your government would take stock of the present lethargic and slow-moving approach to investigations, which seems to reveal a conspiracy to protect certain individuals and prevent the truth from emerging, and take quick action to unravel all causes of this massacre, thus ensuring justice to those affected as soon as possible. Only that will prove to us that you stand for truth and justice, and the protection of the rule of law, and not for political gain.

"We would like to inform you that if truth and justice can't be assured and the incident is dealt with rather superficially, we will be forced to agitate for such through alternative ways. We hope you act on this urgently and provide a credible answer at least within one month."

The government has denied any lethargy in carrying out the investigation and says nearly 700 people have been arrested and that it is ready to take legal action.