Government needs to take action against perpetrators, they say 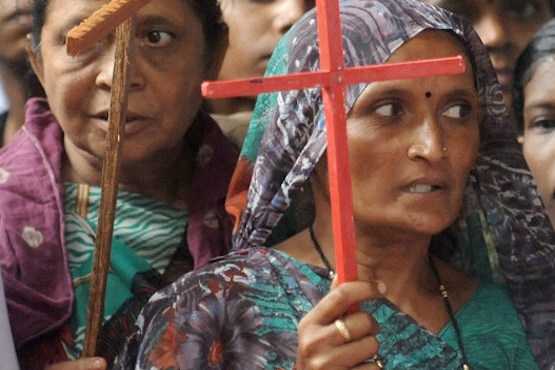 Indian Dalit Christians during a 2012 protest rally in New Delhi where they were demanding equal rights. Since 2012 there has a dramatic increase of crimes committed against Dalit says the Catholic Bishops' Conference of India. (Photo by AFP)

Indian bishops have condemned a nationwide spike in violence against Dalit people and have urged the government to take action against perpetrators.

"It has become an order of the day that the Dalits ... are persecuted in various parts of the country in the name of meat consumption and protection of cattle," said Cardinal Baselios Cleemis, president of the Catholic Bishops Conference of India in a statement on July 22.

The bishops' statement quoted government records showing that there were 47,000 cases of crimes committed against Dalit people in 2014 — an increase of 39 percent compared to 2012.

"It is against the civic conscience that the Dalits, who suffer from social backwardness and marginalization, have been inflicted with heavy pain and causalities," said the head of the Indian bishops' conference. "The Catholic Church in India expresses its solidarity with the Dalits."

Cardinal Cleemis urged state and federal governments to take "immediate action" against those who promote violence.

Those who are in a responsible position should refrain from any sort of activities that constitute a breach of equality and human dignity, the cardinal's statement said.

The statement also condemned the kidnapping and assault against a Catholic bishop in southern India who is a Dalit. Three priests from upper-caste groups have been arrested over the crime against Bishop Galela Prasad of Cuddapah allegedly over a dispute about diocesan roles.

The cardinal demanded "strong legal action" against the criminals who attacked the bishop, in his first public reaction to the incident reported three months ago.

Five members of a Dalit family, including a physically disabled man, were beaten up by "cow vigilantes" in the southern Indian state of Karnataka on July 10. The family had been accused of eating beef.

The state police reportedly arrested the Dalit victims under a state law that bans cow slaughter. The attackers were released on bail although they were arrested under the non-bailable offence of attacking people who are part of a community previously considered as low caste.

On July 18, media reported that another cow vigilante group in Gujarat state stripped and beat four Dalit men who they accused of skinning a dead cow. The gang posted a video of the attack on social media to deter others.

On July 8, six tribal and Dalit villagers, including a 15-month-old baby, were shot dead in Eastern India's Kandhamal district when police opened fire mistaking them for Maoist militants.

The Sanskrit word Dalit means "trampled upon" and is now used to denote all socially poor castes that were once considered untouchable by Indian society. Although law has abolished the practice, social discrimination and oppression against the Dalits, irrespective of religion, continues.