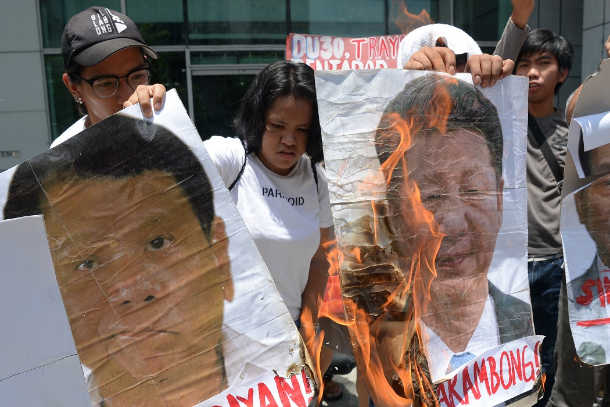 At least two leading Catholic bishops in the Philippines have expressed agreement with the result of a recent survey that says Filipinos deeply distrust China.

"It is not surprising for me that most Filipinos don't trust China," said Bishop Arturo Bastes of Sorsogon, adding that even he himself doesn’t. "I belong to this group of Filipinos who not only mistrust China but are even angry with China, the bully of Asia," said the prelate.

He said Chinese people should be aware that fellow Asians have the same feeling of mistrust and anger with their bullying and authoritarianism, added Bishop Bastes. Manila Auxiliary Bishop Broderick Pabillo said he was also not surprised with the result of the survey, which was released early this week. "I can sense it in my talks with people from all walks of life," he said, adding that China is not trustworthy because it is not democratic. The bishop said that aside from its being authoritarian, China's policies are not transparent. "This is also supported by what it does in other countries, and with religions and other groups in China that it perceives as rivals," he said. A survey released on Nov. 20 by pollster Social Weather Stations revealed that Filipinos' trust in China had fallen from "poor" to "bad," with a net trust rating of minus 33 in September 2019. This was nine points lower than the minus 24 a few months earlier in June. Mistrust of China has grown since Philippine President Rodrigo Duterte assumed office in June 2016. Duterte has forged warmer ties with China despite Manila’s maritime dispute with Beijing in the South China Sea. The United States, meanwhile, maintained its "excellent" net trust rating of +72 as of September this year, while Australia was “good" at +37, Japan "good" at +35  and Singapore "moderate" at +26. Trust in Vietnam was "neutral" at net zero. The presidential palace, meanwhile, said it could not force Filipinos to like China but was optimistic that Beijing would eventually be appreciated by the people. Presidential spokesman Salvador Panelo said he was not surprised by the result of the survey, adding that the palace does not feel affronted. He said the survey results are foreseeable and understandable given the conflicting positions of China and the Philippines on the South China Sea. "The Office of the President will neither court nor force any citizen to change his or her sentiments toward our giant neighbor in the north," said Panelo.