Some 100,000 displaced residents continue to live in temporary shelters after losing their homes in the fighting (photo by Al Jacinto)

The country's Catholic bishops issued an appeal for humanitarian aid in Zamboanga on Tuesday as the southern Philippine city looked to recover from three weeks of fighting between government troops and Muslim rebels.

"We call on your help to sustain the Church’s aid, and together bring the Christian message of love and peace to our brothers and sisters in need," said Bishop Broderick Pabillo, chairman of the social action secretariat of the bishops' conference.

The prelate said the fighting between the military and Moro National Liberation Front (MNLF) fighters had a "devastating impact" on the people.

At least 200 people – including rebels, security forces and civilians – have been killed in the fighting. The government declared that "the worst is over" at the weekend but that sporadic fighting is still taking place.

The needs of more than 100,000 displaced people will continue to rise each day while homes and communities are rebuilt over the next three months, Pabillo said.

Authorities say some 10,000 homes were lost during the fighting and estimated losses to business have been pegged at about US$115 million.

The National Secretariat for Social Action of the Bishops' Conference of the Philippines has so far provided a $2,300 initial contribution to Zamboanga archdiocese’s relief efforts.

The archdiocese is currently catering to the needs of some 18,736 evacuees in 11 Church-run evacuation centers.

Pabillo said the situation in the centers varies, adding that at least seven of the facilities have kitchens, but the rest have no provision for cooking.

The government's social welfare office yesterday announced that it has set aside $2.3 million for "food assistance, non-food items, financial assistance, cash-for-work in the operation of community kitchens, hygiene and sanitation, and meal distribution" in the city. Army and rebels both slammed for Zamboanga abuses 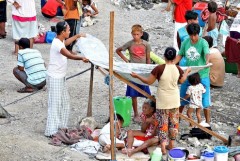