Residents of Davao City offer flowers at the site of a bomb blast that killed 14 people and left 67 others injured in Davao City on Sept. 2. (Contributed photo)

Church leaders in the Philippines have appealed for calm after a bomb explosion killed 14 people and left 67 others injured in the southern city of Davao on Sept. 2.

"Let not vengeance be our response but peace," said Archbishop Socrates Villegas of Lingayen-Dagupan, president of the Catholic bishops conference.

Villegas called for the "restoration of brotherhood and harmony for Davao and for the nation" even though violence and act of terrorism "jolt us."

"When fellowmen die, a part of our humanity dies, too," he said.

"This evil will not stop us from standing again," said the prelate, who is also vice president of the bishops conference.

He praised those who attended a memorial Mass at the blast site on Sept. 3.

"Evil came, destruction came, death came … no sense at all," said Valles who said he heard the sound of the explosion from his residence a kilometer away. 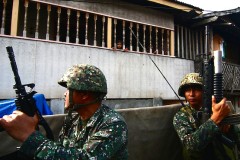 Archbishop Romulo Valles of Davao leads a memorial Mass at the site of the bomb explosion in Davao City on Sept. 3. (Contributed photo)

President Rodrigo Duterte declared a "state of lawless violence" a few hours after the explosion.

"There is a crisis in this country involving drugs, extra judicial killings, and there seems to be an environment of lawlessness or lawless violence," said Duterte who was Davao’s mayor for two decades.

He said the "state of lawlessness" would stay "until such time that I would say that it is already safe."

Duterte said his declaration was "not martial law" and only means that the military and the police will "run the country in accordance with [the president's] specifications."

Father Jerome Secillano, executive secretary of the public affairs office of the bishops' conference, appealed to the government not to use the president's declaration "to trample on the rights of ordinary and innocent Filipinos."

"I think the government is doing its best to ensure the safety and security of our citizens," the priest said.

"To allay the fears and concerns … I think it would be better for the government to clarify the scope and extent of its actions while the country is under the 'state of lawlessness,'" said Secillano.

Despite assurances from authorities that the situation in the city is under control, most residents avoided public places on Sept. 4, two days after the explosion.

Catholic churches, usually full at weekends, were not crowded. Only a few people were seen outside church squares despite the presence of the policemen and soldiers.

Even the city's malls and parks were almost empty.

City officials announced that the night market, the site of the blast, was back in business.

The place used to be the gathering place of locals and tourists where they enjoy the local food, massage, or shop for clothes and souvenirs.

Davao Mayor Sara Duterte — President Duterte’s daughter — said the people of Davao "will not be terrorized by this heinous crime." A man takes part in a candle lighting ceremony outside a church in Manila on Sept. 3 to remember those who died in a bomb explosion in Davao City. (Photo by Angie de Silva)

The European Union issued a statement on Sept. 4 expressing "solidarity" with the people and the government of the Philippines.

"The international community is working together to counter this global threat [of terrorism], and we stand by … the Philippines in their efforts to provide stability and security for their citizens against this threat," it added.

The United States offered assistance in the investigation of the incident.

The explosion came days after President Duterte ordered a military offensive to eliminate the Abu Sayyaf, a small but dangerous group of militants that has declared allegiance to the so-called Islamic State terror group.

The Abu Sayyaf, which is notorious for kidnapping foreigners to extract ransoms, has claimed responsibility for three bomb attacks, one in Davao, in 2005 in response to a government offensive against the group.

Philippine authorities have announced that they were already searching for two women and one man for questioning in connection with the bombing.