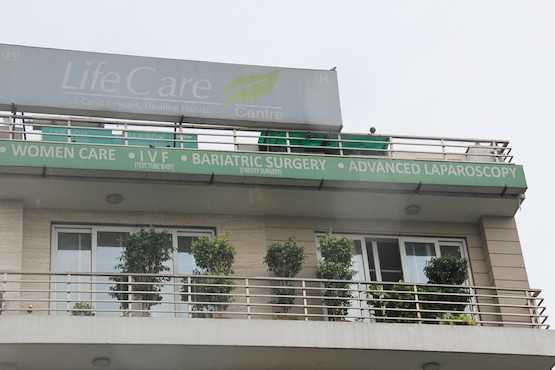 One of the several medical facilities in New Delhi that offers fertility services to help childless couples. The Indian government has approved a bill that puts a complete ban on commercial surrogacy but does allow for only Indian couples who have been married for at least five years to opt for surrogacy, provided one or both have proven fertility-related issues. (ucanews.com photo)

Kiran Puspa Kujur was disappointed. She looked again at the TV but the news report was clear: the Indian government had approved the Surrogacy Regulation Bill banning the commercial procedure in the country.

Unable to have a baby after 10 years of marriage, her dream of becoming a mother was "crushed" as surrogacy was her final option. "The government does not understand the pain and agony I am going through. Only God knows what my status will be in society," Kujur, a Catholic, told ucanews.com.

Aiming specifically at the exploitation of surrogate mothers and their children, the bill has banned commercial surrogacy, including the sale and purchase of human embryos, sperm and eggs. The bill does, however, allow for ethical surrogacy in certain cases, for example, when an unpaid relative carries the baby to term.

But for Kujur and others like her, the chance of having a child has diminished. "My only hope is that one of my relatives agrees to be a surrogate and that seems impossible," she said.

A surrogate is "a woman who becomes pregnant usually by artificial insemination or surgical implantation of a fertilized egg for the purpose of carrying the fetus to term for another woman," according to the Miriam-Webb Dictionary.

The procedure is very expensive because the surrogate is usually paid handsomely and all her medical fees are covered. India, which opened up to commercial surrogacy in 2002, emerged as a hub for childless couples from abroad as well as locals wanting to rent a womb.

A 2012 study by the United Nations revealed that in India, the surrogacy business was worth more than US$400 million per year with over 3,000 fertility clinics across the country. But the bitter truth came to light when Thailand, one of the biggest surrogacy hubs, banned the procedure in 2015 after an Australian couple abandoned one of their twins because he had Down syndrome.

In a similar case in India in 2014, another Australian couple took home just the girl among their twins as they only wanted a female. The boy was left behind with the surrogate.

Bishop Theodore Mascarenhas, secretary general of the Catholic Bishops’ Conference of India, said the commercialization of surrogacy is against human dignity. "The church does not support surrogacy in any circumstances because it is morally and ethically wrong," he said. "It commercializes the human body."

Th option of surrogacy should only be given to a genuine couple, according to Jyotsna Chatterjee, director of the Joint Women’s Program of the Church of North India.

"Surrogacy creates an identity crises in later life. It has become a trade and many people made it into a business like trafficking," she said.

Meanwhile, fertility specialists expressed doubts about the proposed law, saying it could lead to an illegal surrogacy industry.

The new bill has been approved by the federal Cabinet but yet has to be approved in parliament. While it puts a complete ban on commercial surrogacy, it does allow for only Indian couples who have been married for at least five years to opt for surrogacy, provided one or both have proven fertility-related issues.

It allows for close relatives to offer altruistic surrogacy but bans unmarried people, live-in couples and gay people from opting for surrogacy.

A woman can become a surrogate mother only for altruistic purposes, the bill says, but under no circumstances will she be paid for it, except maybe towards medical expenses.

Sharda Jain, secretary general of Delhi Gynecologist Forum, said "it is fine with the ban on unmarried people, live-in couples and gay couples to opt for altruistic surrogacy but what about the couple who can’t have their own?"

"They have choice and money, also the surrogate mother wants to do it as she is paid a hefty sum which can help her family. Surrogacy is a win-win situation for both the parties," said Jain, who has helped many childless couple through surrogacy. It is impractical that any one will render the service for free, not even relatives, she added.