Bishop: Vatican is free to work with everyone

UN is not the 'devil,' Vatican official says 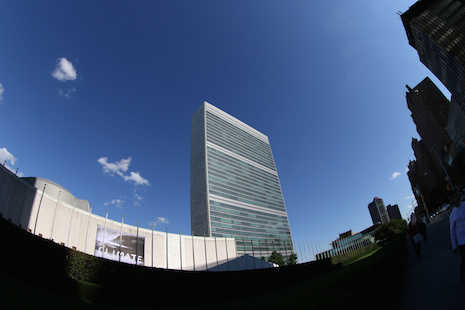 The Vatican will continue to colloborate with the United Nations on any joint project that 'does not go against the doctrine of the Church,' a Vatican official says. (Photo: CNS)

The United Nations is not "the devil," so a papal think tank is free to collaborate with the international body as well as people of any political persuasion, said Bishop Marcelo Sanchez Sorondo, chancellor of the Pontifical Academy of Sciences.

The Church will continue to collaborate with the United Nations on any joint project that "does not go against the doctrine of the Church," he said at a news conference July 15.

The academy is also sponsoring a related daylong workshop July 21, bringing together 60 mayors and top-level representatives of major cities around the world to take concrete steps against modern-day forms of slavery in their communities. Many mayors also will attend the next day's Vatican event in the hopes of adding their voice and support to sustainable development goals that will be up for approval at the United Nations in September.

The meeting is the second the pontifical academy has organized this year with key leaders and advisers from the United Nations.

While some have objected to the Vatican cooperating with organizations and individuals who promote population control in ways that clearly violate Church teaching, Bishop Sanchez said the Church works with everyone in order to join forces on common concerns.

"The invitation is open to everyone. If you would like to invite other people, we would be very pleased," the bishop replied to a journalist who asked why 12 Italian mayors participating in the conference were mostly from center-left political coalitions or parties.

"All of your friends from the right, or even if they are not your friends, but in any case, we would welcome everyone; we have nothing against it," he told the journalist.

In response to a question about whether the Vatican was letting itself become a platform for the United Nations to promote its own agenda, Bishop Sanchez said the idea for and organization of the meeting came from the pontifical academy with added input from the U.N. development network.

"The United Nations is not the devil. Rather, quite the opposite," he said.

Blessed Pope Paul VI, who was the first pope to visit the United Nations, told the General Assembly in 1965 that the world organization represented the mandatory path of modern civilization and world peace, Bishop Sanchez said. Successive popes showed the same kind of support with their own visits to the United Nations, too, he said.

"Therefore, I don't see how there can be any problem" with collaborating with the United Nations, especially as the academy has worked with many other world organizations and leaders, he said.

"To see the devil in the United Nations, which some on the right tend to do, is not the position of the Holy See," he said.