A wounded policeman is placed on a stretcher at the scene of a bombing in the town of Jolo on Sulu island in the Philippines on Aug. 24. (Photo: Nickee Butlangan/AFP)

Bishop Charlie Inzon of the Apostolic Vicariate of Jolo in Sulu in Mindanao said authorities must first consult the public before considering imposing martial law in the region.

“It would be better to consult stakeholders, such as the local government, civil society organizations, religious groups, people’s organizations, [for any decision] to be successful,” Bishop Inzon said in a radio interview.

Bishop Inzon’s call was in response to a statement by presidential spokesman Harry Roque, which said President Rodrigo Duterte was considering declaring martial law in Sulu province following the bombings that killed 15 people and wounded 72 others.

Jihadist group Abu Sayyaf has claimed responsibility for the Aug. 24 bombings near the cathedral in Jolo, the provincial capital.

Roque said on Aug. 26 that Duterte was considering whether to declare martial law to suppress “lawless violence” in the region.

Under the Philippine constitution, the president, as commander-in-chief, can call the armed forces, whenever it becomes necessary, “to prevent or suppress lawless violence, invasion or rebellion.”

However, Bishop Inzon said Duterte must not “sacrifice the basic freedoms of the greater majority.”

“I must stress this to all. Community support and cooperation are important to achieve peace in this region. I only pray that basic rights and freedoms of the people here are considered before the government considers imposing martial law,” Bishop Inzon said. 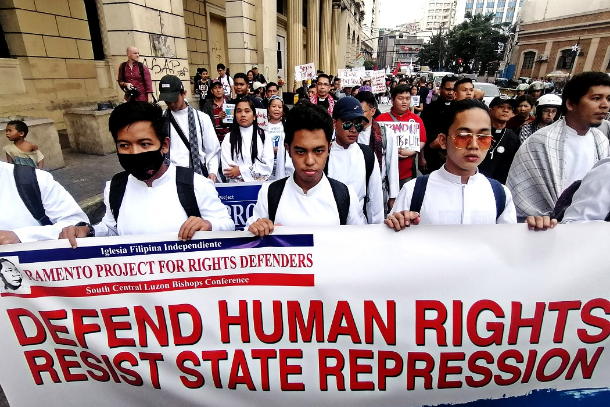 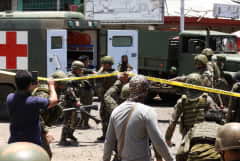 The Commission on Human Rights expressed a similar view, saying the bombings could be resolved without declaring martial law.

De Guia also said that greater cooperation between government authorities and the people are key in solving future conflicts without necessarily resulting in martial law.

“In this case, greater collaboration between the Armed Forces of the Philippines and the Philippine National Police might be the key in preventing future attacks, as well as in making perpetrators accountable for their crimes, and not necessarily martial law,” De Guia told reporters.