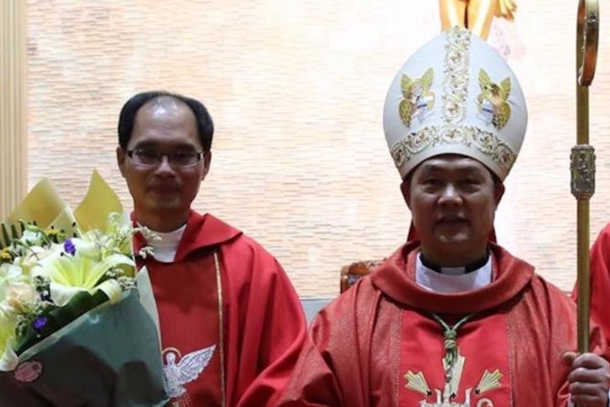 Father Lu Danhua (left) and Bishop Peter Shao Zhumin have both been released by the authorities. The photo shows Father Lu when he was ordained by Bishop Shao on Dec. 14, 2016. (Photo supplied)

An underground bishop and priest have been released by authorities in China's Zhejiang province.

Bishop Peter Shao Zhumin of Wenzhou and Father Lu Danhua of Lishui were freed on Nov. 23 and 22 respectively.

Father Lu, who was ordained by Bishop Shao in 2016, is the only priest in sparsely populated Lishui Diocese, which is adjacent to Wenzhou.

A source called Peter told ucanews.com that authorities did not specify the reason for taking away the bishop but just said "going out for a talk," while Father Lu was detained for illegally holding a Mass at Qingtian Catholic Church.

Peter said Father Lu was detained in a luxurious hotel only a five-minute walk away from his church. The hotel is used to isolate and review officials who violate rules and regulations of the Chinese Communist Party.

"When Father Lu was being detained, more than a dozen members of the Religious Affairs Bureau and the Public Security Bureau of Qingtian County took turns to look after him. Father Lu lived in a room and the guards watched outside," Peter said.

He said Father Lu was released because his brother was sick and needed his comfort.

A source called Thomas told ucanews.com that he believed that Bishop Shao was taken away because Wenzhou Religious Affairs Bureau had always wanted to charge the bishop, but there was no way to do so, so they had "kicked this hot potato" to the Yueqing bureau.

Peter said Yueqing officials had intimidated the bishop to see if his attitude "has been loosened."

Peter also pointed out that local officials recently went to parishes and asked the underground church to be "open" and join the government-approved sector.

"They said that the Sino-Vatican provisional agreement [on the appointment of bishops] implied that former popes had done something wrong, and the one now [Pope Francis] had withdrawn the punishment for eight illegal bishops," Peter said.

"However, the Holy See said that it was they who asked for forgiveness and the pope accepted them back to the church."

He said the provisional agreement had made them confused and he thought it could not improve the situation of the underground church in China.