Bishop Peter Shao Zhumin has been released by Chinese authorities after being detained for seven months.

The underground bishop from Wenzhou Diocese of Zhejiang province was released Jan. 3 and is expected to return to Wenzhou, one of China's biggest Christian citiesm  soon.

A source who wanted to be unnamed told ucanews.com that after Bishop Shao was taken away in May 2017, officials from Wenzhou City Bureau of Ethnic and Religious Affairs tried to force him to sign an agreement.

The agreement requested the bishop to support the State Administration for Religious Affairs and the self-election and self-ordination of bishops.

After a lot of pressure, Bishop Shao signed the agreement just to prove that he had read it but put a remark that he did not agree with the terms, the source said.

“What the government is doing is like the Cultural Revolution, arresting you and forcing you to sign documents to support the authority,” the source said.

Now the bishop is staying in a Catholic’s home in Xining city of Qinghai province in central China, 2,500 kilometers away from Wenzhou, and will go to Beijing for a hearing check Jan. 22 before going back to Wenzhou.

Bishop Shao has a congenital ear disease. During his detention last September, he attended Beijing Tongren Hospital to have ear surgery.

After surgery, he was bought to Xining for recovery but was still monitored.

Bishop Shao was taken away from his diocese on May 18, 2017. It was the fourth detention after he was confirmed as a bishop. 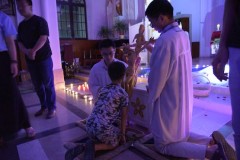 “However, it was the first time that officials from Wenzhou City Bureau of Ethnic and Religious Affairs were involved to arrest him; while only National Security officials did so in the past,” the source said.

The reason for taking away the bishop is still a mystery but it is believed that a new director of Wenzhou Provincial Administration for Religious Affairs wanted to resolve problems concerning Bishop Shao.

Bishop Shao comes from the underground church of Wenzhou and refused to join the State Administration for Religious Affairs. In September 2016, he was confirmed in his episcopacy by the Vatican following the death of his predecessor, Bishop Vincent Zhu Weifang.

The source also believed that authorities released him as a result of pressure from overseas and prayers and fasting organized by Wenzhou Diocese during Christmas.

“The news about Wenzhou Diocese launching monthly prayers and fasting for the bishop starting from Dec. 18 spread out overseas quickly, causing the authorities to take action,” the source told ucanews.com.

The Vatican issued a statement on June 26, 2017, saying it was saddened with the situation of the disappearance of Bishop Shao. The German government also publicly expressed the hope that the bishop may be released.