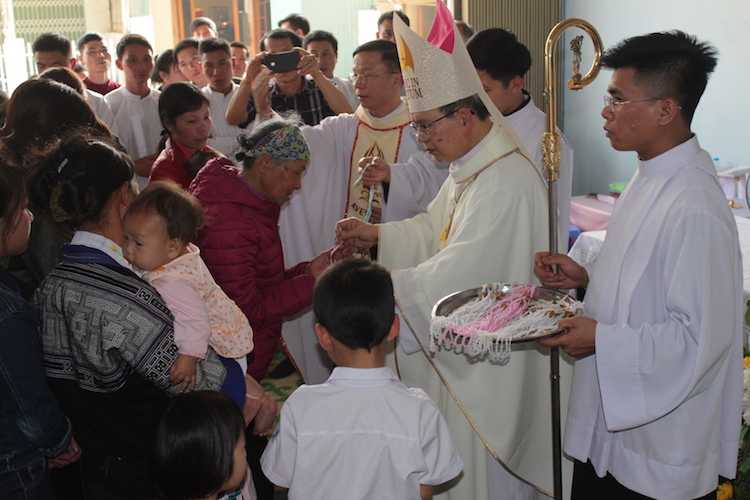 A bishop visited Catholics — many whom were from ethnic minorities — in a mountainous part of north-western Vietnam over the Easter triduum, a first since Catholicism was introduced to the area over a century ago.

Bishop Tat, 74, celebrated Holy Thursday service and washed the feet of 12 Catholics at a family home in Mu Cang Chai District. Some 100 people including 10 ethnic Hmong attended the event.

Mu Cang Chai is home to 50,000 people, 90 percent of whom are Hmong who mainly work on rice terrace fields for a living.

The district consists of 30 Catholic families including Hmong and Kinh ethnic people. For decades the area was recognized by the government as having no religion but this is changing.

"We are very happy that Bishop Tat celebrated holy triduum services for local people. This is the first time a bishop has visited us [during this time] since local Catholic communities were established over 100 years ago," Father Joseph Nguyen Trong Duong, who is in charge of giving pastoral care to the area, told ucanews.com.

A local 65-year-old man said he was happy that Bishop Tat washed his feet during Mass. "Through this experience I feel God's love for us and try to bravely live out Catholic faith in this remote area," he said. The man, who asked not to be named, said his family moved to the area from Thai Binh Province 100 kilometers away in 1977 and had to return their to attend Mass on Easter and Christmas.

During the Mass, Bishop Tat, urged local Catholics to trust in God of love, bring Catholicism to others and work hard to develop the mission station.

Father Duong, who is the pastor of Nghia Lo parish, said he had to ask the government for permission for the bishop to visit which was subsequently approved.

During his visit, Bishop Tat also baptized and administered Confirmation to 31 Hmong adults and children during Vigil Easter Mass at Vinh Quang church. Some 2,000 people attended the Mass.

Hmong ethnic Joseph Mua Vang Sang, a catechist, said this was the first time many Hmong people have publicly embraced Catholicism in the area. Sang, 37, said groups of Hmong catechists visit villages to talk about Catholicism.

According to local priests, some 200 Hmong people were baptized during Vigil Easter Masses in the diocese.