Bishop of Hong Kong passes away at 73 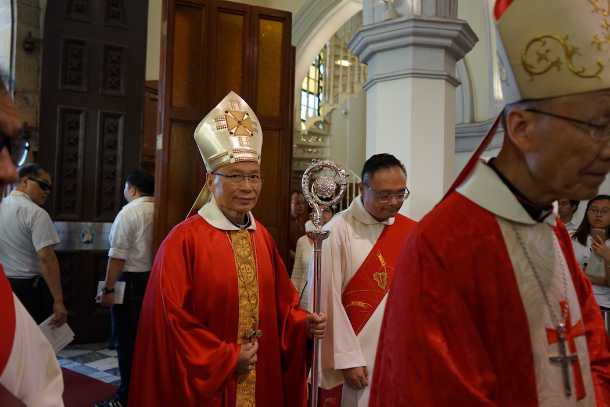 Hong Kong Bishop Michael Yeung Ming-cheung passed away on Jan. 3. He served his episcopacy for less than one and half year. The photo is taken during his installation as bishop in August 2017. (ucanews.com photo)

Hong Kong Bishop Michael Yeung Ming-cheung died on Jan. 3, after serving his episcopacy for less than 18 months, at the age of 73.

Father Joseph Ha Chi-shing, auxiliary bishop of Hong Kong, told the media that the diocese was particularly saddened because the condition of Bishop Yeung had been described as stable only a few hours before his passing.

He also thanked the media for their attention and the prayers of the believers for the bishop.

The diocese informed the Holy See.

And according to the Cannon Law, an administrator would be elected by the Board of Diocese consultors as soon as possible.

The Catholic Diocese of Hong Kong issued a media statement describing the cause of death as liver failure.

Bishop Yeung's funeral arrangements would be detailed in a public statement when finalized.

It was reported that the Holy See had started arranging consultations to find a successor for Bishop Yeung. According to sources, candidates include two current vicar generals, Father Choy Wai-man and Father Lam Cho-ming, and two other candidates who are Jesuits.

There have been media reports that Axiliary Bishop Ha was likely to be appointed as the administrator, but that this might not be welcomed by China's Communist government.

He served in Caritas-Hong Kong for many years.

He was a prelate of the Order of Malta Hong Kong and a lecturer of Hong Kong Holy Spirit Seminary College of Theology and Philosophy.