Bishop Jin of Shanghai dead at 96

Central and controversial figure in the China Church succumbs to cancer 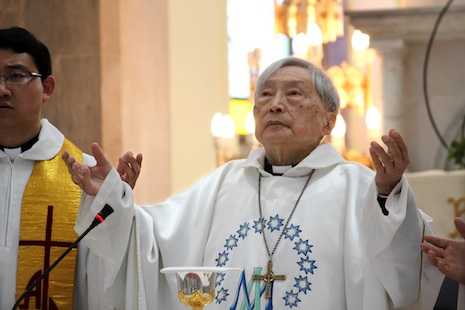 Bishop Aloysius Jin Luxian of Shanghai, a prominent and controversial figure in the Church of China, died on Saturday aged 96 following a long struggle against pancreatic cancer.

His prominence was reflected from the title of his biography Le Pape Jaune (the Yellow Pope), written by French journalist Dorian Malovic in 2006.

Following his release from detention and return to Shanghai in 1982, Bishop Jin played a leading role in the Church in China, It started with his leading the rebuilding of China’s biggest diocese – Shanghai – where he resumed leadership of the seminary on his return. He was taken into detention in 1955 when he was rector of the diocesan seminary in the city.

He became a figure of significance in Shanghai and on the national stage. He persuaded the authorities to allow inclusion of prayer for the Pope in the Eucharistic Prayers said during Masses and helped to develop the liturgy in Chinese. The Church in China lost contact with the reforms of Vatican Council II during decades of political turmoil.

He was named an honorary president of the national Catholic Patriotic Association and the Chinese Bishops’ Conference at the National Congress of Catholic Representatives held in late 2010.

Though his health had deteriorated since Christmas, his name was among the nine Catholic representatives of the 12th National Committee of the Chinese People’s Political Consultative Conference, the top advisory body to the Beijing government.

Bishop Jin was born on June 20, 1916 in Shanghai. His parents died when he was young and, after attending the Jesuits’ high school in Shanghai, he entered the seminary there in 1932. From the local seminary, he entered the Society of Jesus in 1938. He was ordained a priest in 1945 and, after two years of pastoral work, he was sent to Rome to pursue theological studies. He obtained a doctorate in theology at the Pontifical Gregorian University in Rome in 1950 and returned to China as the new Communist regime led by Mao Zedong took over the mainland.

From 1951 on, the government arrested and expelled foreign missionaries as the then Father Jin progressively took charge of the Jesuits in Shanghai, later writing that he knew the time would come when the Security Police would take him into custody. He simultaneously became rector of the Shanghai Diocesan Seminary, the Jesuit’s vice-superior in Shanghai and was designated as the Jesuit Visitor for China, with delegated powers of the superior-general in Rome.

He was arrested with hundreds of priests, religious and laity, in the “September 8 Incident” in 1955, a major crackdown against the “counterrevolutionary clique” of Bishop (later cardinal) Ignatius Gong Pinmei of Shanghai.

Jin was sentenced to jail and re-education for three decades during which time - owing to his fluency in four European languages - he became a translator of technical manuals and other documents claimed to be of importance to China’s industrial development. Though still serving his sentence, he worked for a translation company linked to the Public Security Bureau, a connection that aroused the suspicions of some Catholics.

In 1982, he was released and became the founding rector of the diocesan seminary built near the Basilica of Mary, Help of Christians in Sheshan, outside Shanghai. The seminary has trained more than 400 priests and 16 bishops in eastern China.

Jin and Father Stephen Li Side were together ordained coadjutor bishops without papal approval in 1985, and Jin succeeded as the ordinary of Shanghai’s open community in 1988. The Vatican later recognized Bishop Jin as coadjutor bishop of Shanghai in 2004. When Jin became ordinary in 1988, he invited Bishop Li to be a diocesan consultor.

His death leaves open a succession issue in the open community in one of the most important Chinese dioceses. In 2005, he ordained Auxiliary Joseph Xing Wenzhi as his successor but the Shangdong native faded from visibility in late 2011. According to the 2013 Spring Issue of Tripod, published by the Holy Spirit Study Centre in Hong Kong, Bishop Xing resigned on December 20, 2011. It is not clear whether the Vatican has received or accepted his resignation.

The second auxiliary bishop, Thaddeus Ma Daqin, was restricted from episcopal ministry soon after his ordination last July as he publicly announced he would quit the Catholic Patriotic Association (CPA), which advocates an independent Church for China. The government-sanctioned bishops’ conference subsequently revoked his appointment letter as coadjutor bishop.

Though restricted in his movements by the government, Bishop Ma blogs on his Weibo account - the Chinese equivalent of Twitter - almost every day, sharing his thoughts on the scripture for daily Mass. Church sources said he was taken away from the Sheshan Seminary to a “study class” run by government authorities for two months on April 14 because authorities did not want him to meet pilgrims at the nearby Marian Basilica during Our Lady’s month of May.

Bishop Jin was a friend to numerous international political and religious leaders. He was also one of the four Mainland Chinese bishops invited by Pope Benedict XVI to attend the world bishop synod in 2005. None was permitted to leave the country by the government.