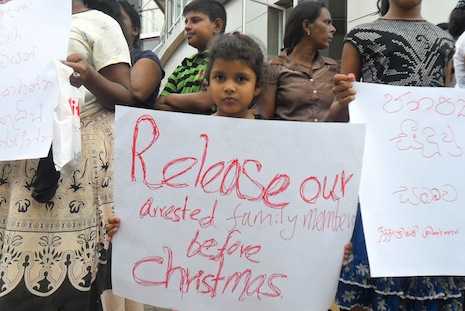 Tamil asylum seekers and other illegal migrants from the north have in increasing numbers sought refuge in Australia, despite the dangers of a perilous journey and the almost certain fate of arrest and deportation if they survive the trip.

Many choose to flee to avoid persistent and pervasive discrimination and harassment by the military, the police and the intelligence forces, according to one Sri Lankan prelate who has taken it upon himself to do something about it.

Bishop Rayappu Joseph of Mannar diocese has written a letter this month to officials in Australia pleading with them not to deport illegal Tamil migrants and instead consider offering political asylum.

“It is my considered opinion that it is highly dangerous for the asylum seekers from the North and East of Sri Lanka to be sent back to [the country] in the prevailing political situation in these regions,” Bishop Joseph wrote in the letter, sent on December 3.

The Sri Lankan government was quick to respond to the letter. Church sources who asked not to be named said officials from the Criminal Investigation Division questioned Bishop Joseph on December 7 about the context of his letter and whether it could be seen to tarnish the image of security forces in the country.

Of the 6,192 Sri Lankans who arrived in Australia by boat this year, 511 have been returned, according to government data.

About 90 percent of returnees were Tamils.

Father Anthony Victor Sosai, vicar general of Mannar diocese, said many Tamils have appealed to the bishop for help.

“Displacement, threats, unemployment and fear of harassment are common problems for them,” he said.

“This is a common appeal without caste or creed.”

An estimated 100,000 Tamils remain displaced and homeless more than three years after the end of Sri Lanka’s bloody civil war – in many cases, because their land has been seized by the military, which maintains a heavy presence in the former Tamil Tiger-held north, said opposition lawmaker and lawyer M.A. Sumanthiran.

“I had nowhere else to flee, so I made use of an opportunity to seek political asylum,” said Jesudasan Pillai, 45, a father of three.

He was caught and remains in custody, as his court case has been postponed several times.

Pillai was among a group of more than 100 people who were beaten by police and security forces for their support for the opposition during provincial elections this year.

Commander Kosala Warnakulasuriya, a Sri Lankan Navy media spokesman, said the rise in cases of illegal migration had less to do with political or social conditions at home than with a recent easing of restrictions on fishing in territorial waters in the north and east.

He has told local media that pro-Tamil lobby groups have used the issue to attempt to discredit the Sri Lankan government.