Bishop Rex Ramirez is formally installed as the second prelate of Naval Diocese on Jan. 12, three days after his Episcopal ordination on Jan. 9. (Photo by Elmer Recuerdo)

A new prelate has been installed in Naval Diocese in the central Philippine province of Biliran, which was ravaged by a strong typhoon last month.

Bishop Rex Ramirez was installed as the diocese’s second bishop in a subdued ceremony on Jan. 12, three days after his Episcopal ordination on Jan. 9.

The prelate replaced Bishop Emeritus Filomeno Bactol, who retired after serving the diocese since its establishment in 1988.

Naval is a suffragan diocese of Palo Archdiocese.

Mayor Eulalio Maderazo of Caibiran in Biliran province said the installation "was very welcome news for people in need of a spiritual anchor during this time of distress."

Caibiran and Naval were devastated after landslides brought about by heavy rains claimed the lives of at least 42 people. At least a dozen others remained missing.

"Calamity is part of our lives. We should not only be resilient but be ready all the time," said Bishop Ramirez, who led relief efforts in the archdiocese in the wake of Super Typhoon Haiyan in 2013.

"We learned the hard way," said the new prelate, adding that the Catholic Church needs to come up with "a good response to this present calamity."

He said devastated communities needed to be relocated and rehabilitated. "This is a task of the government but I’m sure the church will find ways to help out," he added. 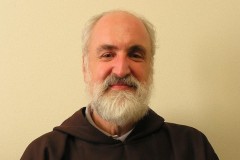 The diocese has 17 parishes and mission stations with 27 priests serving 220,000 people.