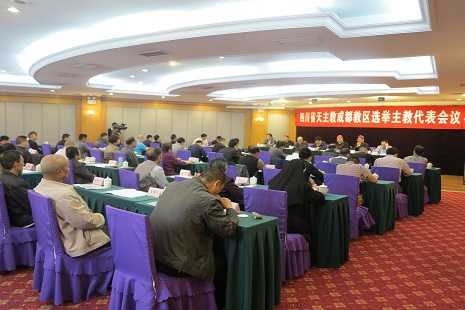 China on Thursday held its first bishop election since Pope Francis assumed the papacy in March last year, in what will be a key test of relations between Beijing and the Vatican as they decide whether to endorse the candidate.

Father Joseph Tang Yuange of Chengdu diocese in southwestern Sichuan won against two other priests in two rounds of voting, in the presence of Bishops Luo Xuegang of Yibin and Joseph Chen Gong’ao of Nanchong, the only two Vatican-approved prelates in the province. Government officials were also present, as is normal at bishop candidate elections in China.

“Among the voters which included priests, deacons, nuns and laypersons, 39 votes went to Fr Tang and eight voted against him,” said a Church source who took part in the poll at a Chengdu hotel.

The Chinese bishops’ conference, which is not approved by the Vatican, must now decide whether to approve Tang, a sensitive process which has caused disputes between Beijing and the Vatican in the past. It remains unclear whether the Vatican will endorse Tang to become a bishop.

The candidate, born in 1963, became a priest in 1991 and serves as the vice secretary-general of the provincial Church Affairs Committee and president of the Catholic Patriotic Association, a state institution.

There has been a vacancy for a bishop in Chengdu since the previous bishop died in 1998. Father Simon Li Zhigang became the new bishop candidate in May, 2011 but died shortly afterwards of liver cancer aged 48.

The move on Thursday to elect a new bishop candidate is seen as a key test of relations between the Holy See and Chinese President Xi Jinping, who took office a day after Francis became pope in March last year.

Talks between the Vatican and Beijing ground to a halt after China ordained three bishops without papal approval in 2011 and 2012. But Church observers are hopeful that Francis and Xi will mend relations after the pope told Italian daily Corriere della Sera he had written to the Chinese president and received a reply.

In the past few weeks, however, China appears to have initiated a crackdown against Christians with the demolition of a large church in the eastern port city of Wenzhou and the removal of 14 church crosses.

On Tuesday, an advisory report for China’s National Security Council identified religion among a list of threats to Chinese identity and national stability.