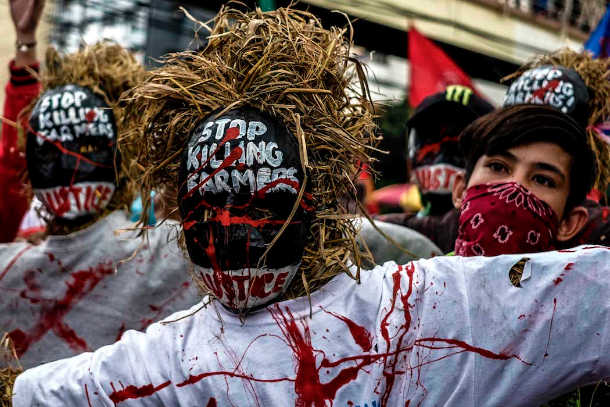 Filipino activists dramatize their call for an end to attacks and killings of farmers during a demonstration outside the presidential palace in Manila in October. (Photo by Karl Romano)

A Catholic bishop has demanded an investigation into the killings of 14 farmers, one of whom was reportedly a church worker, during three police operations in the central Philippine province of Negros Oriental on March 30.

Bishop Gerardo Alminaza of San Carlos said the victims lived in one of diocese's mission stations, including a lay leader on the outskirts of the city of Canlaon where eight men were killed.

"The parish administrator ... can vouch for [the victim's] moral character," said the bishop said, adding that he received information that the policemen did not even show arrest warrants.

"We demand a quick investigation into this and appeal to the authorities to restore peace and order," said Bishop Alminaza.

"What’s happening? Are we still observing law and order?" added the prelate.

The victims were killed during what authorities described as an "anti-criminality campaign" in Negros Oriental province, specifically in Canlaon City and the towns of Manjuyod and Santa Catalina.

He said the victims were killed after firing at police officers.

But witnesses, mostly relatives of the victims, including children, told human rights group Karapatan that the victims were executed.

Among those killed were Edgardo Avelino, 59, chairman of the farmers' organization in Canlaon; his brother, Ismael, 53, a farmer; Melchor Panares, 67, another farmer, and his son, Mario; Rogelio Ricomuno, 52, and son Ricky Ricomuno, 28; Gonzalo Rosales, 47, and Genes Palmares, 54.

"Their ages and the circumstances of their deaths give lie to the government’s claim of having killed communist guerrillas," said lawyer Neri Colmenares.

He said almost everyone died as their families watched. "What resistance are [the police] talking about?" said Colmenares

Two of those killed in the town of Manjuyod were elected village leaders.

Witnesses said the police officers had their faces and nameplates covered, while some wore tinted glasses even in the middle of the night.

At least 15 other farmers, including two women, were arrested and taken to police headquarters.

The police officers ordered people out of their homes while the victims were shot dead, according to witnesses.

Ismael’s wife, Leonora Avelino, 46, said she was at home with her husband and their four young children when the policemen entered their house about 2:30 a.m.

They were held at gunpoint and had to wait until seven o'clock in the morning to see the policemen dragging the lifeless body of Ismael into an ambulance.

Next door, Edgardo’s wife, Carmela, woke up to see her son being dragged out of the house by policemen. She and her daughter were also ordered out.

The Commission on Human Rights said it would investigate the killings.

At least 180 farmers, 40 of whom were from Negros island, have been killed since 2016 when President Rodrigo Duterte came to power.

In October 2018, nine sugarcane farmers in Sagay, Negros Occidental province, were eating dinner when they were killed by up to six gunmen.

Attacks on organizations perceived to be critical of the government are part of the Duterte administration's campaign against alleged communist rebels, according to rights groups.