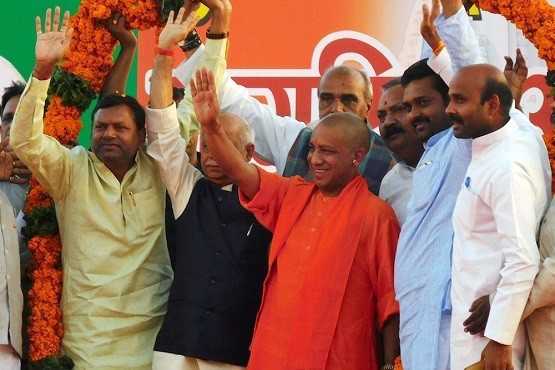 Uttar Pradesh Chief Minister Yogi Adityanath (center) waves to supporters as he arrives to address a gathering in his home constituency of Gorakhpur on March 25. (Photo by IANS)

A majority of Hindus are tolerant toward other religions but politicians deliberately create problems as a distraction from other grievances, says the secretary-general of the Indian Catholic bishops' conference.

Bishop Theodore Mascarenhas was reacting to a leader of India’s ruling pro-Hindu Bharatiya Janata Party (BJP) who rejected the concept of government secularism.

Yogi Adityanath, the 45-year old chief minister of India’s most populous state of Uttar Pradesh, said governance in India could at best be sect-neutral.  "No system can be secular," he told a function on Nov. 13.

Adityanath should work for the development of the common people and not talk about issues that do not matter to them, Bishop Mascarenhas said.

The prelate noted that India has a secular constitution regardless of public comments by Adityanath.

The Hindu god symbolizes victory of good over evil.

The bishop countered that "the real Ram" represented  tolerance, peace, justice and harmony.

"Politicians, however, are dishing out different definitions of it," Bishop Mascarenhas said.

The Hindu priest-politician Adityanath, who became chief minister of Uttar Pradesh in March this year, is viewed by many political experts as the BJP’s new face in India.

He is also chief priest of the state's famed Gorakhnath Shiva temple.

He enjoys greater political influence among Hindus of the state because of his hard-line views on the Hindu religion and practice.

At least 18 criminal cases were laid against him in the past, including criminal intimidation and rioting.

"Yogi Adityanath says secularism is a lie and compares Modi’s government to Ram Rajya," Sibal wrote on a blogging site.

Sibal maintained that it was Adityanath who was telling lies.