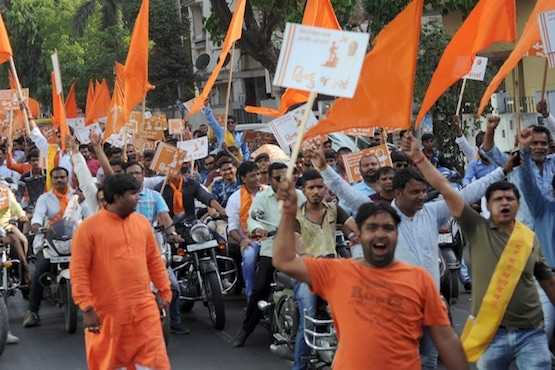 Activists of the radical Hindu group, VHP, seen in this file photo at a procession organized on Ram Navami festival on April 5, 2017. (Photo by IANS)

By ucanews.com reporter in New Delhi

An Indian Catholic leader has slammed an inflammatory call by a radical Hindu group for the execution of people who slaughter cattle or transport beef.

The senior prelate was responding to ucanews.com following media reports that the VHP had resolved to press for a national law against cow slaughter stipulating death sentences for violators.

Since the pro-Hindu Bharatiya Janata Party came to power nationally in 2014, India has witnessed more than 20 mob lynchings connected with what is generally referred to as "cow slaughter".

The media have widely reported orchestrated attacks on Muslims and Dalits, formerly known as untouchables, by so-called cow vigilantes.

A report, compiled by IndiaSpend, India’s first data journalism outfit, found that Muslims were targeted in 51 percent of violence connected with bovine issues between 2010 to 2017.

Hindu leader Narayana Maharaj Shinde during the recent VHP meeting defended cow vigilantes and said those who sell cows were as much culprits as those who slaughtered them.

Bishop Barwa said demands for capital punishment for cow slaughter targeted Christians, Muslims, Dalits and indigenous groups who had no religious prohibition on the eating of beef.

He said attempts by some Hindu groups to exploit the issue for political purposes would fail because India remained a peace-loving country.

Vinay Kumar, of the National Federation for Dalit Land, expressed concern that even without a draconian capital punishment law, Dalits would continue to be murdered with impunity in the name of cow protection.