Close to 12,000 suspected drug users have been reported killed 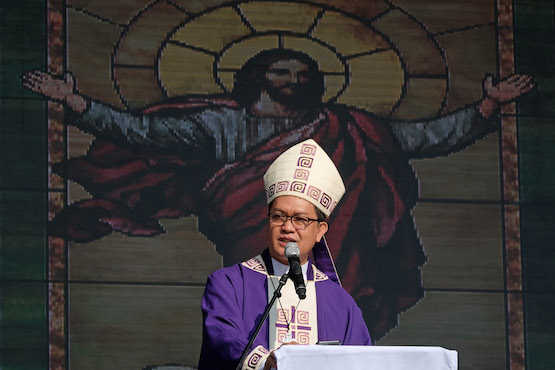 Bishop Pablo Virgilio David of Kalookan speaks to about 7,000 young people during a Singles for Christ International Conference in Makati on Feb. 17. (Photo by Roy Lagarde)

A Catholic bishop in Manila has chided Filipinos for what he described as their apathy and indifference to the growing number of drug-related killings in the Philippines.

Speaking before a gathering of about 7,000 youth, Bishop Pablo Virgilio David of Kalookan lamented that many people agree that drug "addicts are not human."

"My heart bleeds when there are Catholics who agree that criminals cannot be reformed, that they deserved to die and be exterminated if we are to have a peaceful Philippine society," he said.

Philippine President Rodrigo Duterte, who is waging a bloody war on crime, has repeatedly justified the large-scale killing of drug users by suggesting the victims were not human.

In his homily during a 25th anniversary Mass for the group Singles for Christ on Feb. 18, Bishop David said there was a need for a different approach to the anti-narcotics war.

He said the intimidation and killings would not stop the drug problem.

Human rights groups have reported that at least 12,000 suspected drug users and dealers have died in the almost two-year government campaign against illegal drugs.

Bishop David said the church supports the campaign against illegal drugs, "but our question is how are you fighting this war?"

"I know [the government has] declared a war. But my question is war against whom?" he added.

"Before declaring a war, are we not supposed to identify first who our enemies and allies are? That's all we are asking," said the bishop whose diocese has been at the forefront of the supposed war.

The prelate said he cannot remain silent on issues affecting his pastoral territory, which has the biggest population of informal settlers in Manila.

Bishop David described the proliferation of illegal drugs as a "spiritual and a psychological disease."

"In their struggles with fear, with insecurities, with depression, and isolation many people resort to the negative way of coping and they become enslaved," he said.

The bishop said the government should go after the manufacturers and illegal drug syndicates to stop the narcotics trade.

"It is those who victimize the sick whom this government should go after," he said, adding that drug addicts need help, not scorn and hateful revenge from the public.

He said it is not easy to take a stand to stop the killings and start the healing.

"[We] now are in bad company because we are trying to save the addicts, the people you are told to avoid," Bishop David told the young crowd.