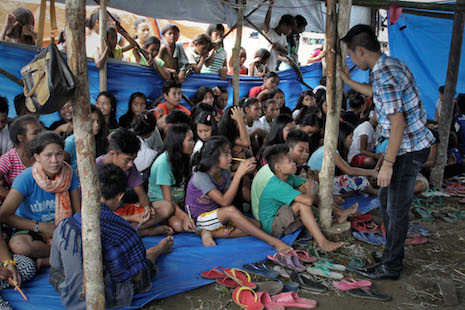 Manobo tribal children attend classes in a makeshift classroom in an evacuation center in Tandag City. (Photo by Vincent Go)

A Catholic bishop in the southern Philippines called for an "independent, nonpartisan investigation" into a report that government troops stood aside while paramilitary forces attacked an indigenous community in the province of Surigao del Sur.

"I can testify that their ground commander was there," Bishop Nereo Odchimar of Tandag told ucanews.com.

The prelate said he met with the military official who was in the village of Han-ayan in Lianga town during the Sept. 1 killing of two Manobo tribal leaders and the head of the village's school for indigenous children.

The killings resulted in the evacuation of some 3,000 indigenous villagers who fled their homes in the hinterlands of the province for fear of more attacks by gunmen belonging to paramilitary groups.

"Paramilitaries in Mindanao have been terrorizing tribal people while the military at best does nothing," said Phil Robertson, deputy Asia director at Human Rights Watch.

The group called on the Philippine government to "urgently act" to end the abuses and investigate alleged complicity by military personnel.

A Philippine Army investigation has concluded that the Sept. 1 killing in the town of Lianga was the result of a conflict within the tribe.

In a statement to the media on Sept. 13, Army spokesman Col. Benjamin Hao said the investigation did not establish any "direct or indirect" link to the military in the killings perpetrated by members of the Magahat and Bagani Force.

Bishop Odchimar, however, said he doubts the military report "because of the contradictions." He said a high-ranking military official even disclaimed the presence of the military during the incident.

"[The ground commander] said that during the night of the harassment [soldiers] were there and they withdrew ... about 100 meters," the prelate said. "Any commotion can be heard from that distance," he said.

Bishop Odchimar told ucanews.com that the paramilitary forces in Mindanao were the creation of the military.

"Many years ago, the military organized the tribal people to fight the insurgency ... It seems that the undertaking went out of hand, [the military] can no longer control the Magahats and the Baganis," the prelate said.

"The names of members of the Bagani have been cropping again and again during the time of harassments," Bishop Odchimar said. Manobo tribal villagers continue to live in an evacuation center in Tandag City after fleeing their villages Sept. 1. (Photo by Vincent Go)

Human Rights Watch in its report said local government officials in Surigao del Sur have linked military personnel to the paramilitary groups involved in the attacks.

"The administration [of President Benigno Aquino] should not only be cracking down on the paramilitaries, but also on the military officers supporting them," Robertson, of Human Rights Watch, said.

Indigenous and environmental groups have repeatedly accused the military of using paramilitaries to help clear ancestral areas to pave the way for mining companies.

Several areas in Mindanao that have been declared by indigenous peoples as their ancestral domain are known to be rich in mineral and natural resources.

Bishop Odchimar said mining operations in indigenous peoples' lands are "one of the causes" of the attacks of tribal communities.

"They want the Lumad to vacate the area," he said.

Indigenous peoples' groups in Mindanao are collectively known as the Lumads.

"It is difficult for the Lumads to leave. That is their ancestral land. [Mining companies] cannot just ease them out," said Bishop Odchimar.