Politicians must not damage the people's friendship by acting rashly, says Bishop Katsuya South Korean protesters hold an anti-Japanese rally in Seoul on Aug. 15 to mark the anniversary of Korea's liberation from Japan's 1910-45 colonial rule. Seoul and Tokyo are mired in a dispute over Japan's use of wartime forced labor. (AFP photo)

A Japanese bishop has called on political leaders in Japan and South Korea to reduce tensions between the countries by dealing sensitively with the past and by addressing unresolved issues with calm and rational dialogue.

Bishop Taiji Katsuya of Sapporo, president of the Japan Catholic Council for Justice and Peace, issued a statement in both Japanese and Korean titled “Toward Reconciliation of the Japan-Korea Governments’ Relationship” on Aug. 15.

He stressed that “regardless of policies, Japan and Korea should be important neighbors, and politicians must not damage the people's friendship by acting rashly.”

The worsening trade dispute between Seoul and Tokyo is related to lingering resentment among Koreans of Japan’s wartime actions.

In a series of rulings since October 2018, South Korea’s Supreme Court has ordered Japanese companies to compensate Koreans who were used as forced labor during World War II. However, the Japanese government believes that the compensation issue was resolved by an agreement signed by both countries in 1965.

“Some Japanese lawyers and scholars point out that the Japanese government’s response to the issues is not appropriate,” Bishop Katsuya said.

On July 4, Japan took steps to complicate export procedures for materials used in high-tech products to Korea. On Aug. 2, the government announced plans to drop Korea from Japan’s list of Group A countries that are granted preferential trade status.

This series of measures is considered Tokyo’s response to the Korean rulings. In response, Seoul announced on Aug. 12 that it was removing Japan from its list of preferential trade status countries.

Bishop Katsuya pointed out the thriving “exchange of people and products” between the countries. In Japan, Korean music, movies, TV dramas, foods and cosmetics have become popular. An annual exchange program of Japanese and Korean bishops has continued for more than 20 years. 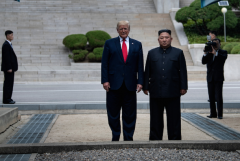 However, Korean people are now boycotting Japanese products, while civil exchange events between the countries have been canceled.

“Japanese media widely report what the Japanese government says but ignore what the Korean side is saying. Therefore, it seems that Japanese society is tending toward criticism of the Korean government,” the bishop said.

“The current tension between Japan and South Korea is deeply connected to unresolved issues regarding Japan's colonial rule over the Korean Peninsula and its liquidation process. I think that we should pay attention to this.”

Bishop Katsuya said the Japanese government must give “special consideration” to its former colonial countries. “There is no other way to solve the issue than a calm and rational dialogue with mutual respect, " he said.