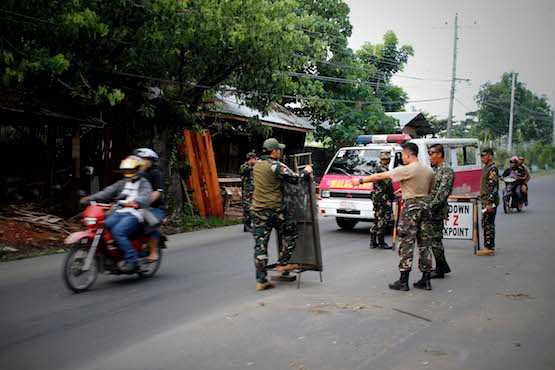 Security personnel man a checkpoint in the southern Philippines. The military has elevated alert levels in the Philippines following the Jan. 14 terrorist attack in Jakarta, Indonesia. (Photo by Joe Torres)

Organizers of this year's International Eucharistic Congress in Cebu have assured delegates of security following the terror attack in Jakarta that killed at least seven people on Jan. 14.

"While we commiserate with the victims of the bombing, the incident provides even more impetus for us and our security agencies to be vigilant," said Auxiliary Bishop Dennis Villarojo of Cebu.

The prelate, who serves as secretary-general of the congress — which is expecting  at least 15,000 participants from 90 countries — said authorities are making the meeting "as secure as possible."

Bishop Villarojo said the same security template for last year's visit of Pope Francis and the Asia Pacific Economic Cooperation summit in Manila in November will be used during the congress.

"Cebu is unlike Indonesia," said Bishop Villarojo. "We have never had any such incidents in the past due perhaps to the relative ease for the topography of Cebu to be secured."

Bishop Villarojo said there have been no cancellations of attendance to the Jan. 24-31 international meeting.

Following the Jakarta attack, the Philippines military announced that it has gone on "heightened alert."

"The [military] is now elevating its alert levels to ensure a state of readiness should there be a need for it in case of certain contingencies," said military spokesman Brig. Gen. Restituto Padilla.

He said the country's security agencies have not monitored any threat so far, but "proactive measures" to prevent the spread of extremist activities have already been done.

Police and military operations are ongoing in suspected hideouts used by Islamist groups in the southern part of the country.

Padilla also downplayed assessments made by security analysts that the so-called Islamic State may soon establish a wilayat or province in Mindanao.

"Our intensified operations will catch up with them whether or not they have pledged their allegiance to Daesh," said Padilla using another name for the terrorist group.