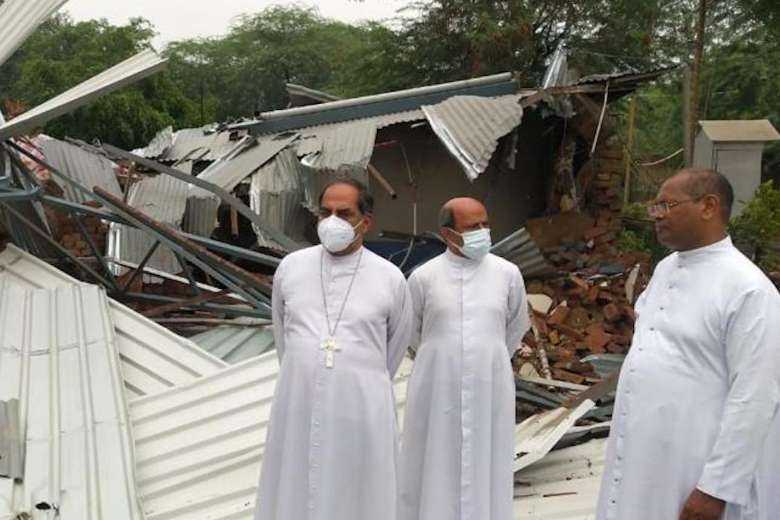 A Catholic bishop in the national capital has urged Indian Prime Minister Narendra Modi to help rebuild a church demolished by authorities who claimed it was on unauthorized land.

Little Flower Church, managed by the Syro-Malabar Church in Lado Sarai, was pulled down on July 12 following an order from the Delhi Development Authority (DDA).

“We have appealed to Indian premier Modi to look at the matter and do the needful as it is a very serious matter of concern and if not taken seriously it may give a wrong message,” Archbishop Kuriakose Bharanikulangara of Faridabad told UCA News.

“Our papers on church land are complete and there was no such issue in the past. The incident has extremely saddened our people, who are in a state of shock.”

Archbishop Bharanikulangara said the land was bought in 2006 and Little Flower Church had been holding services for the last 12 years.

However, on July 9, a notice was put on the church’s boundary wall saying it was on illegal land.

On July 12, the DDA came with police officers and machinery and demolished the church.

The prelate said it was very disheartening to see the church demolished, especially as the DDA did not even give church officials time to explain their stance.

Church and political leaders across India have condemned the demolition.

Archbishop Joseph Kalathiparambil of Verapoly said the demolition “has cast a shadow on the secular nature of the country. For several years, some 1,500 faithful from around 450 families used to rely on the church for prayers.”

Metropolitan Kuraikose Theophilose of the Jacobite Church based in the southern state of Kerala said that such acts are an infringement on the rights conferred on citizens and religions by the constitution.

“We urge the Delhi government to make alternative arrangements for the people who lost the church to pray,” he added.

Arvind Kejriwal, chief minister of Delhi, told media that he was told the action was ordered by the DDA, which comes under the federal government, but he assured he would provide all help and support.