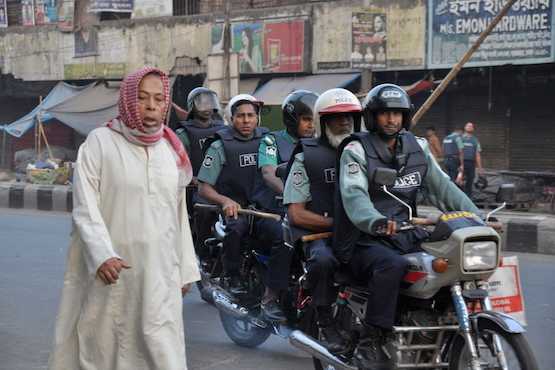 A Muslim man walks in front of policemen on patrol during a security check in Dhaka in this file photo. Police have arrested more than 8,500 people across Bangladesh in a special anti-militancy drive. (ucanews.com photo by Stephan Uttom)

Christian leaders including a Catholic bishop have criticized and cast doubt over the effectiveness of an ongoing anti-militancy drive that have seen thousands of arrests in Bangladesh over the past three days.

Police arrested more than 8,500 suspected terrorists in the weeklong crackdown that began June 11. More than 2,000 leaders and activists from the main opposition Bangladesh Nationalist Party have also been arrested, Ruhul Kabir Rizvi, a senior figure in the party told reporters in Dhaka on June 13. The crackdown follows a series of targeted killings including the murders of the wife of a top anti-terror police officer, a Catholic grocer, a Hindu priest and a monastery worker last week.Bishop Gervas Rozario of Rajshahi, chairman of the Bangladesh Catholic bishops’ Justice and Peace Commission said the government may have an ulterior motive for the crackdown."The government might have a different agenda including weakening opposition parties further because this crackdown is not an effective way to eradicate militancy," Bishop Rozario told ucanews.com.Instead of mass arrests, the government needs to use intelligence agencies more effectively to flush out militancy, and make effective efforts to prevent and investigate attacks on minority communities, he said. "Police can make quick arrests in sensational cases, but fail to do so in cases of militancy or attacks on minorities, which is surprising," Bishop Rozario said.The government should check why detectives are failing and ensure that they do their duty more effectively," he added.

Reverend David A. Das, secretary of the National Council of Churches in Bangladesh said arrests should not be arbitrary.

"To avoid further controversy, police need to ensure that no one is arrested unless there are clear reasons to do so," he said.Catholic rights activist Rosaline Costa called the crackdown "window-dressing" and a "flawed policy.""This is just a commercially beneficial drive for police, because they are arresting so-called militants who are not militants at all," she said."This flawed policy is creating panic among people, and real militants are hiding in safe places," Costa, executive director of Hotline Human Rights Trust told ucanews.com."Police usually avoid religious places like madrasas which are a breeding ground for militancy and militants take shelter there. Police can’t curb militancy unless they bust militant dens like madrasas," she said.The drive won’t have any long-term effect in curbing militancy, Dhaka-based security analyst retired Brigadier M. Sakhawat Hossain said."The number of militants held is very small, which means the crackdown has not been effective," Hossain told ucanews.com. "The government is doing it to save face [after receiving] criticism over recent secret killings. This might bring temporary solace for people, but in the long run it [will] turn out to be futile."Police need to conduct an anti-militancy drive all year round to reap good outcome, he said."The government needs to use intelligence agencies effectively to track down from where the militants hail, how they work and what their target plans are," he added.A surge in extremismMuslim-majority Bangladesh has seen a surge in alleged Islamic militant attacks targeting liberal intellectuals, secular bloggers, publishers and professors as well as religious minorities such as Shiites, Hindus, Christians and Buddhists.At least 40 people have been killed in a wave of attacks that began in January 2015, according to a BBC report.International jihadist groups such as the so called Islamic State and Al-Qaeda have claimed responsibility for several killings.However, the ruling Awami League government brushed off such links blaming the attacks on homegrown militants such as the Jamaat-ul-Mujahideen and accused opposition parties of backing them.