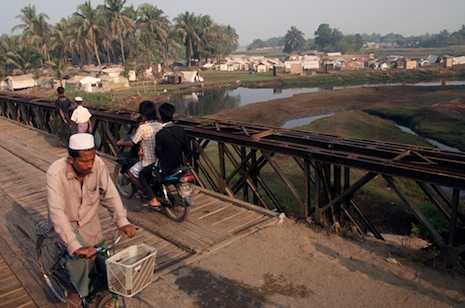 Almost a year after the first eruption of sectarian violence in western Myanmar’s Rakhine State, tensions between Buddhists and Muslims in the region have not dissipated and little progress has been made in paving the way for the tens of thousands displaced by the conflict to return to their homes.

The two waves of violence – in June and October – left scores dead, hundreds injured and more than 120,000 displaced. Thousands of homes were destroyed. The vast majority – over 90 percent – of those displaced are Muslims, most from the Rohingya ethnic group.

Among Rakhine State’s Buddhist majority, there is little desire for reconciliation.

“In previous years, the relations between the two communities were okay,” said Maung Thein Kyaw, a Buddhist man who had been living with his wife and four children in a camp for displaced people since his house was destroyed during violence last year. “But it’s not possible for us to live with the Muslims anymore. They want to take our land and force everyone to be Muslim.”

Furthermore, simmering prejudices against Muslims that became inflamed during the violence continue to dominate public attitudes.

“They burned our homes and raped our women, and they want to occupy this land,” said Than Thun, a high school teacher and community leader in Sittwe. An alleged rape by three Rohingya men of a Buddhist woman sparked the first wave of violence last year.

“With almost all the Bengalis,” he said, referring the Rohingyas as foreigners, “they are illegal immigrants from Bangladesh.”

The prospect of displaced Rohingyas returning to their homes was “impossible”, he said.

The government, too, has shown no urgency in advancing solutions.

A report by the Rakhine Crisis Inquiry Commission that is meant to address the underlying causes of the conflict and propose sustainable solutions has been repeatedly delayed.

Meanwhile, as the monsoon season approaches, The United Nations and European Commission have warned of a humanitarian disaster if the displaced Muslims living in flood plains are not relocated in the coming weeks.

The monsoon season, which starts as early as May, pounds the region with daily downpours. Conditions in most of the camps are already highly unsanitary – leading to numerous cases of respiratory and skin infections, worms and diarrhea – and could rapidly decline further if camps are flooded.

Ma Khin Hla, a 38-year-old woman living in Thay Shaung, a camp of more than 4,000 displaced Muslims near Sittwe, said that with limited food provisions, poor shelter and squalid conditions throughout camp, the health of her children was rapidly deteriorating.

They were frequently sick with fever and stomach pain but have not received any treatment because there are no clinics inside the camp and international aid groups visited infrequently, she said.

Especially vulnerable are displaced people living in sites that the government has refused to recognize as official camps.

Exact figures of their numbers are unknown, but tens of thousands of displaced people live in such unsanctioned sites and their status prevents them from receiving food and shelter provisions from relief organizations.

Most unregistered displaced people live in small huts constructed of foraged materials that will do little to keep rain out.

Despite warnings of catastrophe from numerous quarters, the government has yet to make any movements to relocate displaced people in flood-prone areas.

“Instead of addressing the problem, Burma’s leaders seem intent on keeping the Rohingya segregated in camps rather than planning for them to return to their homes,” said New York-based Human Rights Watch in a report published at the end of last month.

“The government seems untroubled by the dire humanitarian conditions in the camps in Arakan State but it will be responsible for the lives unnecessarily lost,” the report added.