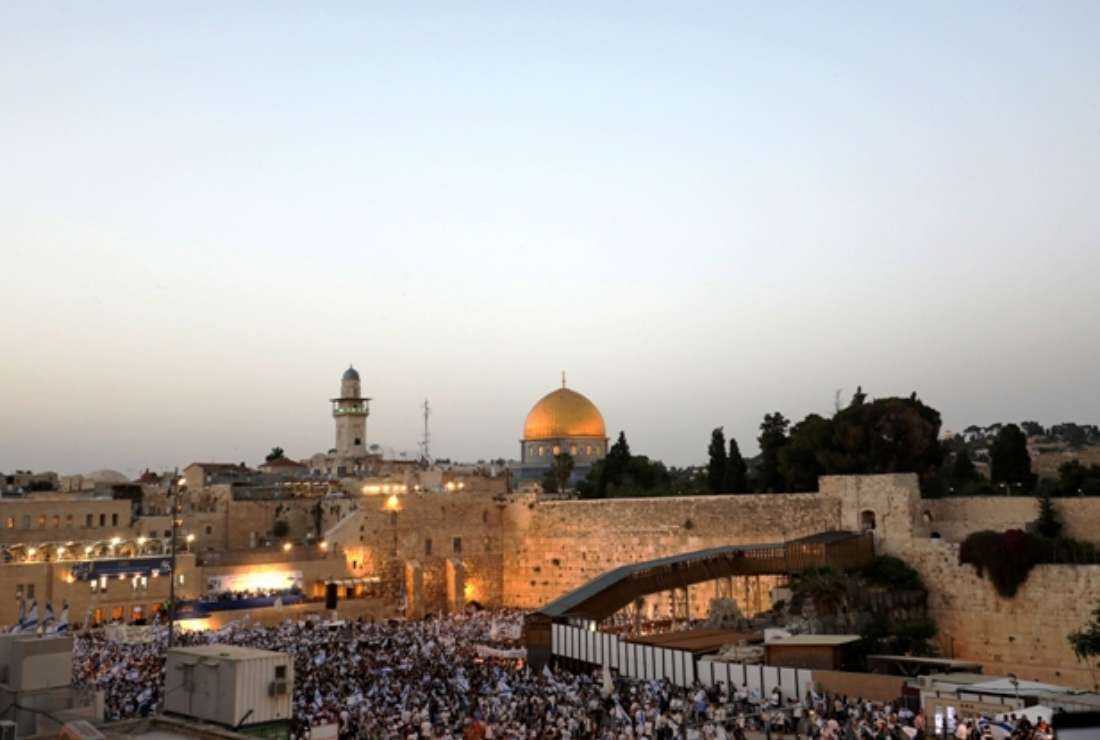 Demonstrators gather with Israeli flags at the Western Wall in the Old City of Jerusalem during a march to mark Jerusalem Day on May 29. (Photo: AFP)

Churches in Jerusalem, where every inch of land means history, heritage and authenticity to the three Abrahamic religions, are looking forward to US President Joe Biden’s visit next month.

Biden will travel to the Middle East from July 13-16 as part of his three-nation tour of Palestine, Israel and Saudi Arabia. The itinerary is taking place at a time of growing unease and dwindling Christian presence in the land where Jesus lived to preach the Gospel and died.

Due to decades-long violence, Christians belonging to the Eastern and Oriental Orthodox Catholic and Protestant Churches are emigrating en masse from Jerusalem. Bereft of its Christian presence, the Holy Land may eventually be reduced to a museum, attracting foreign visitors and international pilgrims to experience the relics of its erstwhile multi-religious coexistence.

Commenting on the Catholic president's visit to the Holy Land, Theophilos III, the Greek Orthodox patriarch of Jerusalem, pointed out that Israeli extremist groups with the tacit support of the government in power are posing a threat to the lives of Christian communities.

The Greek Orthodox Patriarchate, the second-biggest owner of land in Israel after its government, last week lost three real estate assets in the Jaffa Gate area in the Old City of occupied Jerusalem after the Israeli Supreme Court rejected its petition to nullify a suspicious deal.

Since the much-acclaimed peace process between Israel and Palestine is stuck with no point of return, unilateral annexation plans are initiated by individual actors and illegal settlements are on the rise.

Asking the US administration to distance itself from the radical outfits, the patriarch urged Biden to find a solution to attacks on churches and monasteries “perpetrated by extremist groups, in the silence of the official Israeli authorities.”

Palestinian Christians in Israel are concentrated in Galilee in northern Israel and around Jaffa and central Israel. In the Occupied Palestinian Territories, Christians reside predominantly in the regions of Jerusalem, Bethlehem and Ramallah, which serves as the de facto administrative capital of Palestine.

Bethlehem only has one in five families who are Christians — a decade earlier they formed more than 84 percent in the birthplace of Jesus. In Israel, Christians make up 2 percent of its 9.5 million population.

In 1922, when the curtain fell on the Ottoman era, Christians constituted 11 percent of the population of Palestine, which has now been reduced to a mere 1 percent.

Archbishop Yasser Ayyash, patriarchal vicar of the Melkite Greek Catholic Church, which is in full communion with the pope, asked President Biden to include on his agenda the violence perpetrated by extremist groups in the Holy Land.

Hosam Naoum, archbishop of the Anglican Church of Jerusalem, Jordan and the Middle East, called for more awareness among the international community of the pitfalls endangering the Christian presence throughout the Holy Land.

The three-nation trip will begin in Israel and Biden will be visiting East Jerusalem, which houses the holiest sites of Judaism, Christianity and Islam, such as the Temple Mount, al-Aqsa Mosque and the Church of the Holy Sepulchre.

East Jerusalem is recognized as part of the State of Palestine by 138 nations. It is occupied by Israel after it was captured during the 1967 Six-Day War. The Palestinian Authority demands that East Jerusalem be made the capital of a future Palestinian state and Biden’s visit could cause Palestinians false hopes about its future.

From Israel, Biden will fly directly to Jeddah — a rarely used route that requires Saudi approval — which is aimed at the normalization of ties with the Jewish state and Saudi Arabia

The US president’s trip to Israel is aimed at increasing the Jewish state’s integration into the volatile Middle Eastern region. The Indo-Abraham Accord and the four-nation grouping of the I2U2 (the US, UAE, Israel and India) will be used by President Biden as a stepping stone to gain more acceptance for Israel in the region.

India, which exerts great influence in the Middle East with its large expatriate working population, will come to the aid of Israeli and US companies to market their cutting-edge technologies among Middle Eastern nations.

From Israel, Biden will fly directly to Jeddah — a rarely used route that requires Saudi approval — which is aimed at the normalization of ties with the Jewish state and Saudi Arabia.

Biden will also go to the West Bank to meet with Palestinian President Mahmoud Abbas. The meeting will likely be held in Bethlehem.

Abbas will press Biden to reopen missions for the Palestinians in Jerusalem and Washington as its plummeting popularity among Palestinians is exploited by Hamas, an Islamic resistance movement fighting for the establishment of an independent Islamic state in historical Palestine.

Biden’s efforts are meant to maintain Israel’s military superiority in West Asia and to boost the US government's strategic ties with Israel, the only nation among the nine nuclear powers that does not acknowledge possessing nuclear weapons.

Missiles and weapons won’t bring peace to the three Abrahamic religions that are tied to the ethnic identity politics in the Holy Land. It would be better for them all if Biden gives peace a chance in the Holy Land.