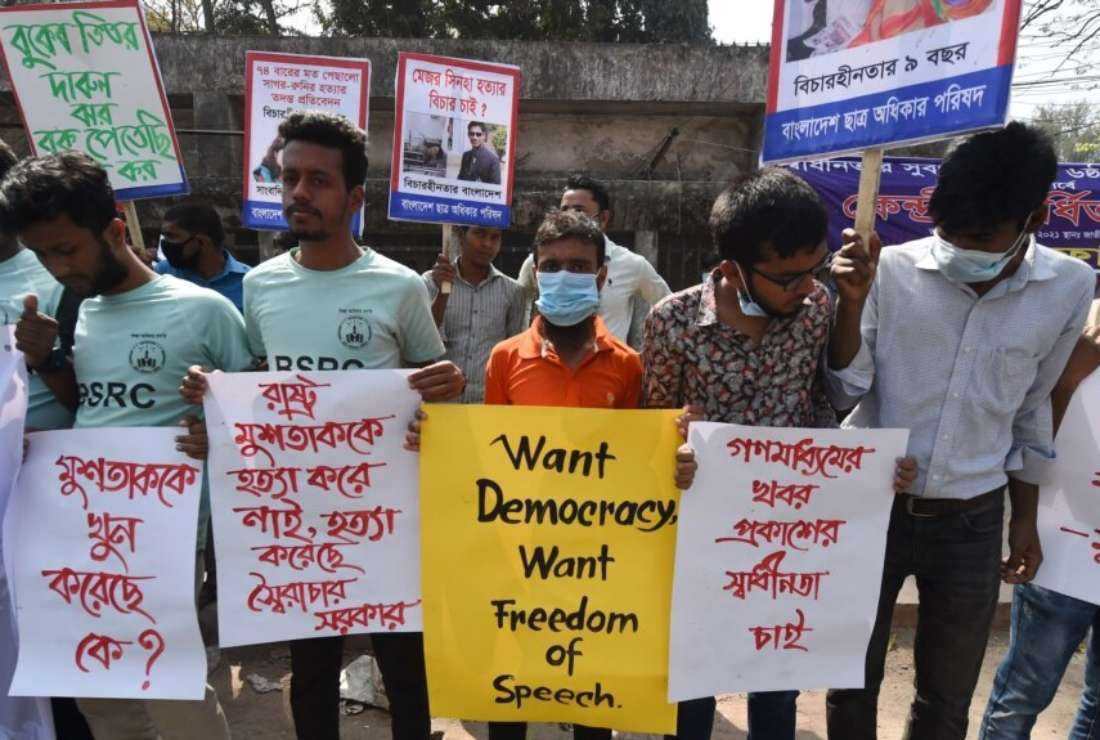 Activists hold placards during a demonstration demanding the repeal of the repressive Digital Security Act, in Bangladesh's captial Dhaka, on Feb. 27, 2021. (Photo: AFP)

The Bangladesh government’s move to toughen a press law has sparked concerns among journalists and activists who allege the changes will curtail freedom of speech.

Authorities recently said several provisions in the Press Council Act (1974) will be amended.

Among other things, the state-run Press Council will be empowered to impose a fine of up to one million taka (US$ 9369) on any newspaper, news organization, editor, publisher or journalist found guilty of violating rules.

The council can order the suspension of public and private advertisements and other privileges for a newspaper, or news agency for a period of up to a year. Apart from this, it can also cancel the accreditation of a convicted journalist.

The proposed law states that decisions of the council shall be final and no questions shall be raised in any court.

The Press Council can also conduct investigations and summons associated newspapers and news organizations if the publication of news or a report undermines the national and public interest.

"The right to go to court has also been curtailed"

The delegation has also handed a memorandum to Quader, who is also secretary of the ruling Awami League, that urges the government to refrain from the move and appealed that all stakeholders be consulted before any changes are made to the law.

Matiur Rahman, editor of Prothom Alo (First Light), Bangladesh’s highest circulated Bengali daily and a member of NOAB, said after the meeting that proposed changes to the law will further increase the level of control over the media and journalists.

“The right to go to court has also been curtailed in this act. That will create self-censorship. I think this fear will hinder our free expression,” Father Augustine Bulbul Rebeiro, secretary of the Catholic Bishops’ Social Communication Commission, told UCA News.

He said most Catholic writers and journalists do not criticize the government much, but some do.

Activists say Bangladesh already has a repressive law, the Digital Security Act (DSA) 2018, which has been widely misused to muzzle dissent and criticism of the government. The DSA and the Information and Communication Technology (ICT) Act 2013 restrict bail and allow arrests without warrants.

The government is afraid of criticism and created a climate of fear to suppress the media, said Faruque Faisal, head of the Bangladesh chapter of Article 19, a global organization promoting freedom of speech.

According to Article 19, hundreds have been sued and arrested under the DSA including journalists. A significant number of the cases were filed by leaders and supporters of the ruling party.

"Many may leave this profession out of fear"

Last year, 25 cases were filed for comments about the government and ruling party leaders including Prime Minister Sheikh Hasina.

In its World Report 2022, Human Rights Watch said Bangladeshi authorities use the DSA to “harass and indefinitely detain” journalists, activists, and others critical of the government, resulting in a chilling effect on the expression of dissent.

A Catholic journalist who asked not to be named termed the proposed law “terrible.”

“It will discourage independent journalism and prevent true journalism. Because journalists don't have enough money to pay fines. So many may leave this profession out of fear,” he said.

Journalists can make mistakes in reporting and such tough punishment cannot be accepted. By doing this, the government wants to keep journalists in a state of fear, he added.

Minister Quader reportedly said the ruling Awami League does not seek favoritism from the media but wants what it "deserves."

“We don’t want full favor from the media. There will also be news of opposition parties according to importance. But the Awami League wants what it deserves,” he said.

“We are not against or an adversary of newspapers. We are each others' partners,” he added.

Bangladesh was ranked 162nd among 180 countries in World Press Freedom Index 2022 by Reporters without Borders, dropping ten notches from the previous year.