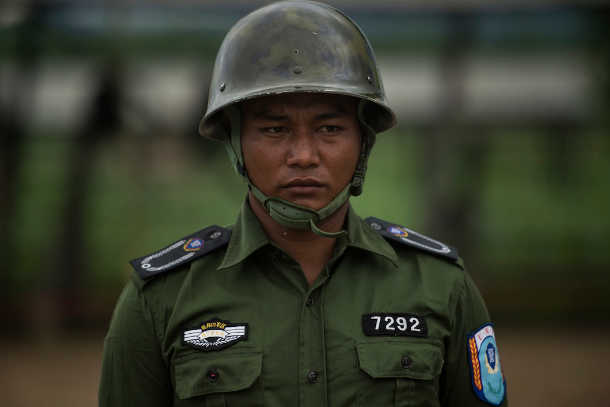 Some of the Bible students forcibly recruited by a China-backed ethnic minority army in Mynamar's northern Shan State have managed to escape.

In groups of two or three, a total of 17 male students fled from a United Wa State Army (UWSA) base situated in the Wa hills near Myanmar's border with China.

"Some them did not have food for several days. Some are suffering health problems and some now have psychological problems," Rev. Lazarus told ucanews.com.

"They can't go back to their homes in the Wa hills, so we are arranging them to continue attending Bible school elsewhere," said Rev. Lazarus, who added that the boys are now being well looked after.

The Baptist leader said 24 students, including 20 females, remain at the Wa army's headquarters.

"We are concerned for the remaining students, especially the women, and we are continuing to call for their release through different channels," Rev. Lazarus said.

The students' ordeal began in mid-September when they were forcibly recruited as part of a UWSA clampdown on Christianity.

The students were taken from Mong Pawk township were 52 churches have been shut down and three have been destroyed, said the Lahu Baptist Convention. The students' Bible school has been closed.

China is believed to be pressuring the UWSA to conduct the campaign that has included the detaining of pastors and the closing down of churches.

They also sent a letter to the UWSA in October but have not yet received a reply.

Three Salesians and a diocesan priest, eight nuns from Missionary of St. Paul and nine lay teachers were also expelled by the UWSA, which grew out of the Communist Party.

The UWSA leadership has deemed only churches built between 1989 and 1992 are legal while banning the construction of new churches, outside clergy and the teaching of religion in schools.

The Wa region is home to a number of ethnic groups including the Wa, Kachin, Ta'ang, Lahu, Lisu, Kokang and Shan who observe Christianity, Buddhism, animism, spirit worship and Islam.

Christians comprise around 30 percent of the estimated 450,000 Wa population.

The 30,000-strong UWSA is accused of being involved in drug trafficking.