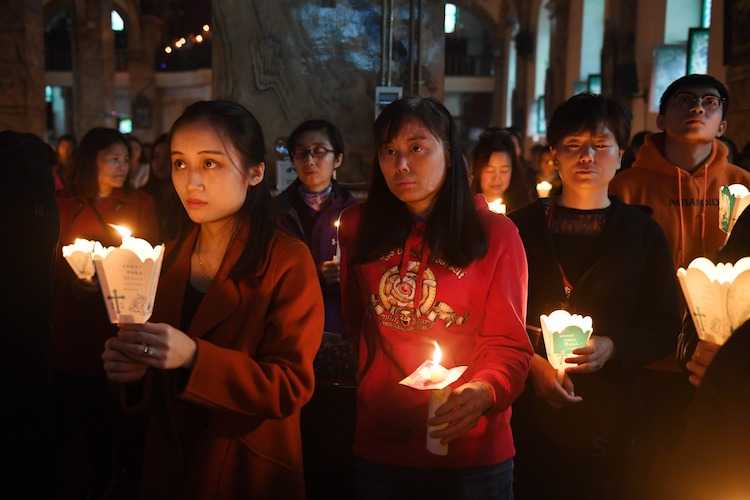 Catholic worshippers attend Mass on Holy Saturday at Beijing's government-sanctioned South Cathedral. Fears are growing that the Chinese government will step up its suppression of religion. (Photo by Greg Baker/AFP)

Catholic groups fear further censorship of religious books, including a state-sponsored re-working of the Bible, and materials both physically and on the internet after China's government banned online Bible sales.

They are concerned that Beijing will bring its heavy internet censorship squarely into the world of religious literature.

"With the implementation of the revised regulations on religious affairs, the religious world on the internet will surely become a target in the next wave of rectification," said Ying, director of the divinity school of Chung Chi College at the Chinese University of Hong Kong.

According to an official document released by China's State Administration for Religious Affairs, one of the biggest tasks in the coming years is to enhance "Chinese-style Christianity and theology" by reinterpreting and retranslating the Bible.

The document, titled "Principle for Promoting Chinese Christianity in China for the Next Five Years (2018-2022)," was formally launched in Nanjing in eastern China on March 28. Some social media users said Bibles started coming down from websites on March 30.

The date coincides with a massive spike in the keyword search "Bible" on Chinese social media platform Weibo the day before, followed by a sharp nosedive to zero on April 1, when the word may have been censored.

The document also states that one of the main tasks for the next five years will be to build up Chinese Christianity and Chinese theology in order to "consciously develop Bible study talents to lay a solid foundation for reinterpreting and retranslating the Bible or writing the reference books."

Some Catholics are worried that books and material about the church may also be targeted as the mistakes of the Cultural Revolution are repeated.

Authorities ordered e-commerce and micro-commerce businesses to remove the Bible from their product lists and ban its sale from March 30.

Taobao, Jingdong, Weidian, Dangdang and Amazon China are no longer selling the Bible. Books about Christianity have also been blocked and the business licenses of some shops have been canceled.

Christian online shopping platform Baojiayin has also stopped selling the Bible but said it would be legally able to sell reference books that may help customers read the Bible.

John, a Catholic internet user, said the Bible had never been allowed to be sold in shops or online on the mainland and one could only buy the officially approved version from the government-sanctioned open church. However, authorities had not strictly enforced the law in the past.

"The next step may be a large-scale clean-up of church materials on the internet," he said.

John told ucanews.com that after the plenary meetings of the National People's Congress and Chinese People's Political Consultative Conference ended recently, a new round of oppression was launched against Christian churches.

"One senses that authorities are stepping up their suppression of religions, especially against the Catholic Church and the Protestant Church," he said.

He believes that this "religious sinicization" is advocated by Xi and is worried that the Cultural Revolution will return. "Isn't it repeating the same mistake of history?" he asked.

Academic Ying posted an article on his Facebook recalling that after the Cultural Revolution there was a serious shortage of Bibles in China.

When Deng Xiaoping visited the U.S. in 1979, then president, Jimmy Carter, told Deng that he hoped China might publish the Bible, and Deng gave him a positive response.

In 1980, the late Bishop Ding Guangxun told the Chinese Christian Conference that China would begin publication of the Bible.

The government-sanctioned China Christian Council reportedly printed three million copies between 1980 and 1986, but it still failed to meet demand.

In 1988, the Amity Foundation and the United Bible Societies jointly established a print factory in Nanjing. It became the only place where the Bible could be legally printed in China, while the China Christian Council was the only agency that could publish and distribute the Bible. By November 2016, the foundation had printed 150 million copies.

In 2004, when the Administrative Licensing Law was enforced, China retained "approval on publishing, printing, exporting, and distributing the Bible." Ying said the government controlled the Bible's sales market.

Bookstores in China may sell religious classics on Buddhism, Taoism and Islam but the Bible of Christianity alone is not allowed, Ying said.

When addressing the national conference on religious works in 2016, Xi noted that officials should "vigorously promote the party's theories on religions, guidelines and policies on the internet, and disseminate positive voices."