The image of the Black Nazarene is lost in a sea of devotees during the annual religious procession in 2018. (Photo: Angie de Silva)

As the Philippines enters its 500th anniversary year of its Christianity against the backdrop of the coronavirus pandemic, the faith and religiosity of the Filipinos withstand the tests of time. So deep is the Filipinos’ faith that even the pandemic cannot deter them from practicing it. This has always been outwardly manifested at important religious festivals.

Except for this year, where the pandemic continues to plague us, mammoth processions, fluvial parades and kissing of images of Jesus, such as during the Feast of the Black Nazarene, Feast of the Child Jesus or the Sto. Niño through the famous Sinulog and Ati-Atihan festivals, are among the creative forms of paying homage to Jesus Christ at the beginning of every year.

From varying perspectives of ordinary people, these faith expressions are meant to fulfill vows in exchange for favorable answers to their supplications. For some, the “sacrifices” are a form of adoration and gratitude for graces received. And for those who atone for their sins, walking barefoot for several hours behind the image of the Black Nazarene is a form of contrition and a humble appeal for pardon. The faithful believe that these are part of the journey towards the attainment of eternal salvation.

The pandemic has not deterred and will never deter Filipinos from practicing their religiosity. While the grand procession, dubbed as the traslación (Spanish word for transfer) was canceled to prevent transmission of the virus, 15 Masses were held in Quiapo Church with the observance of health protocols. The church was a sight manifesting people’s faith so profound that no pandemic could bar them from exercising it. Local commemorations were also conducted in provincial churches.

In his homily during the 4.30am Mass in Quiapo Church on Jan. 9, Bishop Broderick Pabillo told the faithful that the Black Nazarene conveyed a message of assurance of God’s presence. “God is with us in our situation. The cross is not hidden from him. He carried the cross. He stumbled over the cross, but he is with us. Secondly, whatever cross we have in our lives, let us put Jesus there. Therefore, let us pray,” he said.

A secular missionary Filipino priest, Father Julian Gregorio Oyales, whom I met in Guatemala City a decade ago, said that “faith expressions of Filipinos in the devotion of the Black Nazarene have evolved into a major source of popular religiosity, wider and more profound than its historical development propagated by the official Church.”

He added: “While Quiapo is the seat of this devotion, novenas, processions, masses and constant visits to the temples are done throughout the archipelago. Their importance to Filipino Catholics seems to fill in a pastoral and theological vacuum in a country where the faithful need comfort and assurance of salvation, especially in times of constant danger, poverty, neglect and discrimination.  Such comfort and assurance are reflected in the powerful image of the Black Nazarene.”

Making a comparison between these faith expressions in the Philippines and Guatemala, he traced their commonality from the historical origins and developments of both societies under conquest and domination.

“In Guatemala, the devotion to El Sr. Sto. Cristo de Esquipulas, considered by the people and the church hierarchy as Central America’s patron saint, has many commonalities with Quiapo’s Black Nazarene. The massive processions in January are passionately outpouring. The initial talks and the unprecedented peace talks were both carried out in the Basilica de Nuestro Sr. de Esquipulas, whose image resulted in such a historical breakthrough,” Father Oyales said.

“The basilica is the center of pilgrimage to people in Central American and neighboring countries. St. John Paul ll conducted his first visit to the country at the height of the bloodiest military dictatorship of General Rios Montt. The pope did the Holy Eucharist at the foot of El Sto. Cristo Negro de Esquipulas. 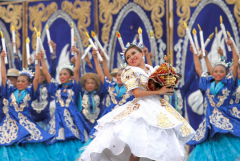 “These devotions are so powerful for people who are repressed, discriminated and downtrodden.”

In 2021, the country’s oldest festival will not be the same as in previous years. People will certainly miss the massive participation of Filipinos and foreigners alike who usually take to the streets to dance the Sinulog, a religious and cultural festival annually held in Cebu City, the country’s seat of Christianity. Sinulog is rooted from the Cebuano word sulog (water current), which is interpreted in the forward and backward steps of the Sinulog dance.

The popular chant “Pit Senyor” (Call on the Lord or Sangpit Senyor) that reverberated in major streets of the city will not be as loud because of pandemic-related restrictions. Nevertheless, limited physical activities and online activities continue to serve as meaningful and creative ways of celebrating this oldest Filipino religious festival.

And lest we forget, the Ati-Atihan festival is held on the third Sunday of January in Kalibo, Aklan. With dancing and music similar to the Sinulog, this feast was originally a pagan celebration that later transformed into a Christian one, symbolized by the carrying of the Sto. Niño during the procession. What is distinct is the painting of faces and bodies in honor of the indigenous Aeta.

The display of faith and religiosity of the Filipinos is evident in many creative and colorful ways. Especially in this time of the pandemic, these have to be concretized through much-needed corporal acts of mercy. These include feeding the hungry, sheltering the homeless, clothing the naked, visiting the sick and imprisoned. No less relevant in our difficult times, where spiritual and mental resources are scarce, are the spiritual acts of mercy, which include counseling the doubtful, admonishing sinners, patiently bearing those who sinned against us, forgiving offenses, comforting the afflicted and praying for the living and the dead.

If we are to make our faith alive, we are also called to respond to the signs of the times. The systematic and massive human rights violations happening in the Philippines, including extrajudicial killings, enforced disappearances and torture, are made more manifest during the pandemic. Our prophetic voices are called for. Sadly, the gross and systematic violations of human rights have not elicited the much-needed outrage of the country’s vast majority who profess the Christian faith. On the contrary, their silence is deafening.

Beyond our faith and religiosity, we are called to respond to the Gospel demands of love of God by loving our fellow human beings.

“What does it profit, my brethren, if someone says he has faith but does not have works? Can faith save him? If a brother or sister is naked and destitute of daily food, and one of you says to them, ‘Depart in peace, be warmed and filled,’ but you do not give them the things which are needed for the body, what does it profit? Thus, also faith by itself, if it does not have works, is dead.” (James 2:14)