Those who stand by their calling and continue to serve until their last breath deserve our gratitude, respect and love 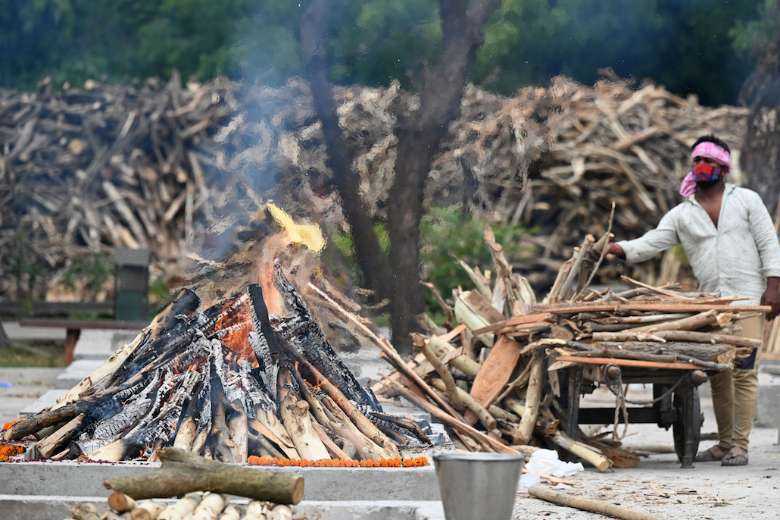 A worker watches the burning funeral pyre of a Covid-19 victim at a cremation ground in New Delhi on May 17. People at the sharp end of the pandemic will have their own lists of martyrs to publish and remember. (Photo: AFP)

The Editors Guild of India recently expressed its condolences over the deaths of journalists from more than 100 newspapers, intranet platforms and independent grassroots media who have died from Covid-19 over the past year.

In April alone, more than 52 journalists died from the virus. Many of these were brave journalists who had been reporting on the worsening pandemic and bringing to the fore stories on the great human tragedy unfolding before us.

The central government itself acknowledged that frontline healthcare workers were vulnerable, disclosing that 174 doctors, 116 nurses and 199 health workers had succumbed to the virus in the country.

Police officers, firefighters, ambulance drivers, gravediggers, cremation ghat attendants, humble delivery boys and even auto-rickshaw drivers who showed heart helping people to hospitals, or bodies on their last journey, will have their own stories to tell, their own lists of martyrs to publish and remember.

All these numbers pale into significance before the thousands of people who died during the extended pandemic that caught India totally unprepared, not once but twice in every aspect of  combating the disease — from an adequate number of hospital beds, oxygen tanks, medicines and vaccines to such morbid issues as sending bodies to cremation grounds, and even a shortage of such places.

Calling, religious calling, is the same as the call of duty. But it is also very different. And more

And if there is to be a third wave of the viral assault in India, one fears the government system will again be found wanting. It remains preoccupied with the falsification of data and protecting the reputation of the leader of the nation.

For the relatives of those who died serving the people, there may not be easy closure. Government and media tell them their breadwinners died serving the people true to the vows and oaths they had taken. Is there solace in this? A moot question. Could better equipment and safety measures have saved lives? A better sense of projecting needs and preparing for the extreme to lessen the risks are questions on the conscience of governments at all levels.

Sense of duty is a real thing, not a slogan. The soldier may have joined the army because of poverty and the lure of a government job. But in hand-to-hand combat with his counterpart from a hostile neighbor, this sense of duty becomes the hormone that fuels his mind and his well-trained muscles. The doctors and nurses, who may not be so noble in their private family lives, transform into something very different in the operating theater and intensive care unit. I have witnessed this myself in recent times as a patient.

Calling, religious calling, is the same as the call of duty. But it is also very different. And more.

This came to mind when Capuchin Father Suresh Mathew, editor in chief of the Catholic Indian Currents weekly magazine — a unique journal known for its political punch — published a list that stunned the Church and secular world alike.

Understandably, a comparatively larger number, 30, were from Kerala, where Christians account for over 20 percent of the state’s 33 million people. Twelve nuns belonging to a single congregation, Mother Teresa’s Missionaries of Charity, who had been working among the community, especially leprosy patients, are no more.

Sister Jessy Kurien, a former member of the National Commission for Minorities Education Institutions and now practising in the Supreme Court and a Covid-19 survivor, says the high rate of casualties among nuns is due to them working in remote areas where good medical facilities are rare, their asymptomatic condition and delays in proper diagnosis.

Why do nuns, and many priests, work in remote areas? Hardline Hindu groups and some others may say their main objective is to seduce innocent people and convert them to Christianity. This is not the place to rebut this claim or to argue that this is such an insult to our fellow Indians, who have been mature enough to join or oppose political ideologies and parties in general elections over 70 years. Their choice of faith is theirs to decide.

The real fact is this: the government is still absent from most remote areas of India other than during elections. Medical care barely exists, while educational facilities are nearly absent.

These are areas where nuns and clergy go to work voluntarily on subsistence allowances. Their joining religious congregations is a voluntary act, as it is in the case of nuns or religious women among Jain and Hindu Sadhvis (nuns).

Officialdom correctly recognizes the inherent bravery and sense of duty that motivates frontline workers to help the critically ill, often at great risk to themselves. It is just and proper that those who pay with their lives be honored and their families compensated.

But we as people must recognize those who stand by their calling and continue to serve until their last breath. They deserve our gratitude, respect and love.